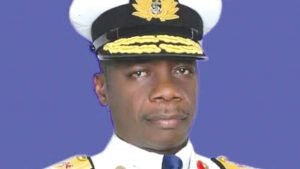 30 June 2018, Sweetcrude, Port Harcourt — Militants in the Niger Delta region have called on President Muhammadu Buhari, to sack and probe the activities of Commander of the Joint Military Taskforce, Operation Delta Safe, Rear Admiral Apochi Suleiman, accusing him of actively taking part in illegal oil bunkering activities in the region.

The militants, speaking under the aegis of Coalition of Niger Delta Agitators, accused the commander of sabotaging the economic growth of the region.

A statement issued at the end of the general assembly of the agitators which was signed by ‘General’ John Duku of the Niger Delta Watchdogs and convener of the coalition with 12 other heads of various militant groups, regretted that a security agency saddled with the responsibility of fighting crime was deeply involved in the same crime.

The agitators explained that they began an investigation on the JTF following the concerns raised by other groups and communities in the region, which had hitherto accused the leadership of the JTF Operation Delta Safe, led by Rear Admiral Suleiman of illicit oil bunkering in the Niger Delta region.

The statement read, “After receiving report from our intelligence and surveillance units and all the affiliate groups of the Coalition of Niger Delta Agitators across the region and beyond, which we mandated to investigate the activities of the JTF Commander in the Niger Delta, the shocking report indicted the JTF and its leadership of complicity and involvement in illegal oil bunkering of great magnitude in the Niger Delta.

“After careful deliberation on the report, we call on President and Commander-in-Chief of the Armed Forces to order immediate removal of the JTF Commander, Rear Admiral Apochi Suleiman from the Niger Delta region.

“The activities of the present JTF in Niger Delta led by Rear Admiral Apochi is sabotaging the economic growth of Niger Delta and Nigeria in general; if the present JTF leadership is allowed to continue, it would be dangerous and difficult for the government to implement the 2018 budget through crude oil.

“It is unfortunate that JTF whose responsibility is to protect oil and gas installations plays major role in supporting and stealing crude oil in the Niger Delta; we therefore warn that the government should immediately replace all the JTF personnel including the Commander in the Niger Delta.”

The group further warned that failure to remove and replace all JTF personnel, including the commander in the Niger Delta, would lead to another round of crises in the region.

“We therefore call on the Economic and Financial Crimes Commission, EFCC, Independent Corrupt Practices and other related offences Commission, ICPC, Office of the National Security Adviser and Military Authorities should as a matter of urgency remove and probe the activities of JTF Commander – Rear Admiral Apochi Suleiman before it is too late.

“We also use this medium to call on the Ministry of Defence and Military Authorities to restructure the Joint Task Force (Operation Delta Safe) with immediate effect in order to avoid breakdown of law and order because we will not sit down and watch them conniving and steal millions of crude oil barrels on daily basis.

“We shall not fold our arms and watch this illegal activities continue unabated, a stitch in time saves nine.”

Meanwhile, all efforts by our correspondent to reached the Spokesperson of JTF Operation Delta Safe, Leut. Col. Ibrahim Abdullahi, has proved abortive as several calls made across to his phone were not answered. His mobile phone, however, was switched off when the calls became severe.

It will be recall that several groups in the Niger Delta region, including the Ijaw Youth Council and civil society groups, recently protested in Abuja, calling for the sacking of the JTF OPDS Commander over his alleged involvement in the unceasing and lucrative business of oil theft in the region.