*Focus is on producer talks ahead of key meeting in Vienna
*WTI ended the week 0.1 percent lower; Brent also dropped

Futures fell 0.3 percent in New York on Friday. Oil ministers from Saudi Arabia and Russia are set to talk next week, fueling speculation that two of the world’s biggest crude exporters may be ready to wind down historic production limits. Meanwhile, Venezuelan oil exports have been crippled as the Latin American nation spirals toward economic collapse. 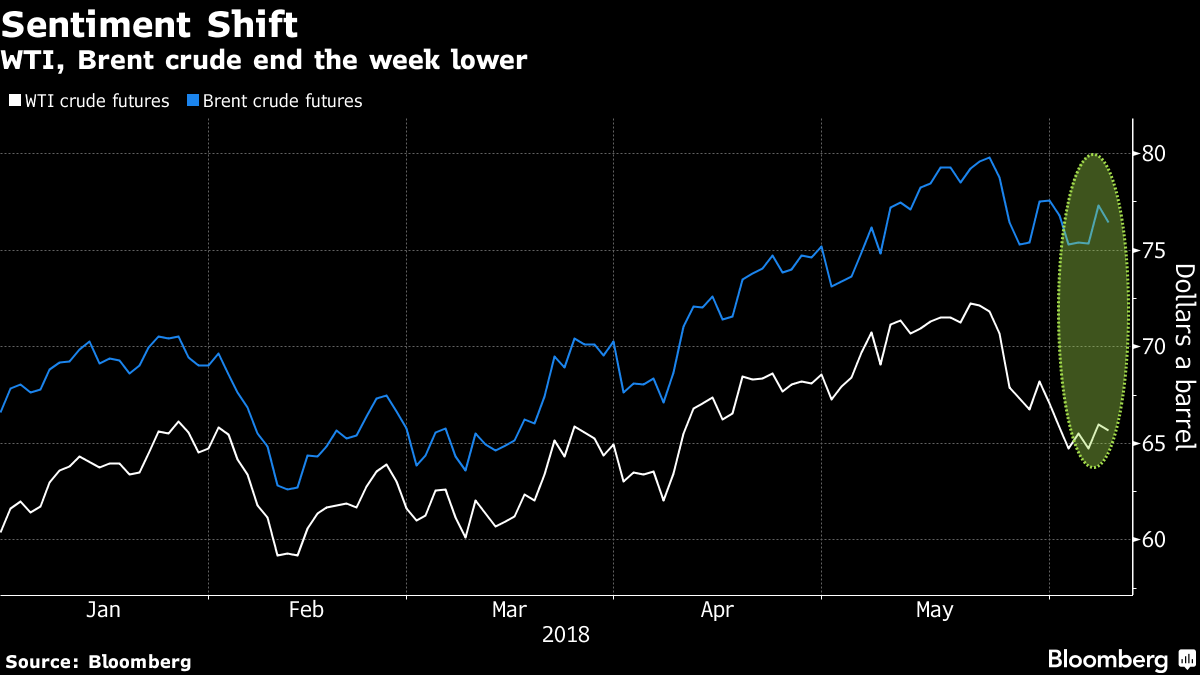 Next week’s discussion between Russian Energy Minister Alexander Novak and his Saudi counterpart Khalid Al-Falih in Moscow may be a prelude to a broader gathering of OPEC members and allied producers later this month. The U.S. has appealed to OPEC to raise output amid a run-up in domestic gasoline prices, even as American crude output surges.

“After Saudi Arabia and Russia made the suggestion that OPEC starts lifting output in the second half, the market has been on its heels,” said Jens Naervig Pedersen, senior analyst at Danske Bank A/S in Copenhagen. “In the end, OPEC will make sure to tread carefully.”

West Texas Intermediate for July delivery declined 21 cents to settle at $65.74 a barrel on the New York Mercantile Exchange. Total volume traded was about 15 percent below the 100-day average.

Brent futures for August settlement slid 86 cents to end the session at $76.46 on the London-based ICE Futures Europe exchange. The global benchmark traded at a $10.79 premium to WTI for the same month.

Some OPEC members are reluctant to relax output caps that have been in place since the start of 2017. Against that backdrop, Russian President Vladimir Putin is scheduled to meet Saudi Crown Prince Mohammed bin Salman at a World Cup soccer match on June 14.

“We’re going to be subject to incredible headline risk,” said John Kilduff, a partner at Again Capital LLC, a New York-based hedge fund. At the same time, “these stories out of Venezuela about scores of ships waiting to load and the inability to supply their contractual volumes has really underpinned the market here.”