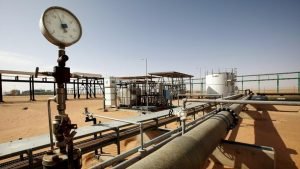 02 December 2018, News Wires — Libya’s oil output is at a five-year high and rare exploration deals with foreign majors are being won but worker dissent and ever-present armed groups risk a repeat of disruptions that have choked off other production surges since the 2011 civil war.

Staff at state oil firm NOC told Reuters that small protests had erupted at nine oil and gas fields and some ports in recent months, mainly among workers left waiting for promised pay rises as inflation and a weak currency erode living standards.

“We are the anonymous soldiers whose rights have been stolen,” said a worker at the al-Intisar oil field, asking not to be named as NOC has banned workers from talking to the media.

“We should be the best-paid workers in Libya but we suffer from poor accommodation and medical treatment in the fields and delays in salary payments.” Other staff made similar comments.

The most stable period of production in the North African country since 2013 has pushed output as high as 1.3 million barrels per day. State oil firm NOC has restarted wells shut for years as security has improved in some areas, while oil majors like BP have said they will revive long-delayed exploration plans.

But approaching or exceeding the output of 1 million bpd has tended to be a psychological trigger for demands from workers and militia groups that also want a share of oil earnings.

In autumn 2014, blockades of oilfields and ports rapidly cut production after it had climbed to more than 800,000 bpd. In May, disruptions slashed output to around 150,000 bpd, its lowest since the war.

Before 2011 Libya was producing around 1.6 million bpd.

NOC said in a statement it was always looking to improve conditions for its workforce and called on the government to approve a pay rise. But years of underfunding and destruction by militias had forced it to focus on damaged infrastructure.

“NOC is constantly having to redeploy budget to restore critical infrastructure; funds that could otherwise be spent on facilities and improving working conditions,” NOC said.

Libya was once one of Africa’s richest countries but living standards for ordinary citizens have declined as the local currency has lost value. The dinar has fallen on the parallel market by as much as 400 percent against the dollar since 2014.

Since even basic foodstuffs like milk have to be imported, inflation has soared, hurting oil workers whose salaries have not risen since 2013. Authorities then agreed a 67 percent pay hike but volatile oil revenues meant it was never implemented.

Priced for its proximity to key European markets and crude quality, Libyan oil has recently been in demand as a substitute for Iranian crude hit by U.S. sanctions.

But NOC staff need to be kept happy as they make up the bulk of the industry’s workforce, operate oil export ports, and are often alone at remote fields where poor security makes oil majors wary of sending their own staff.

Oil workers’ protests have been small and shortlived. But in Libya with its dysfunctional state, pipelines have sometimes been blocked by 20 workers or fewer, industry sources said.

Many Libyans see NOC, which generates billions of dollars annually, as a cash cow that is potentially more responsive to their grievances than the largely absent state.