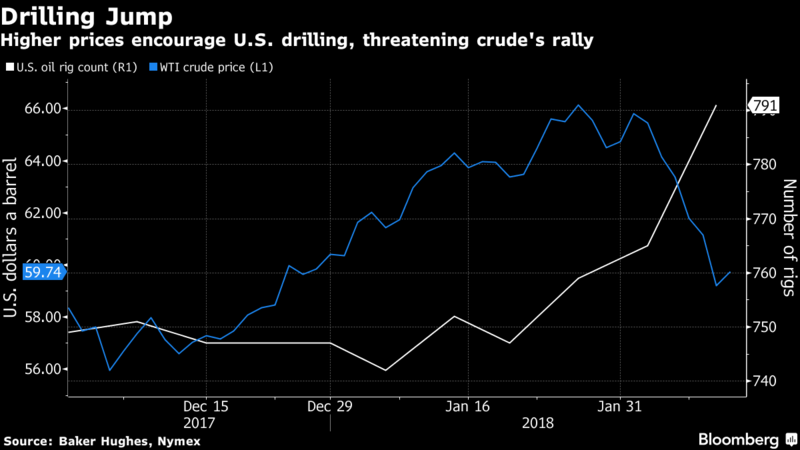 12 February 2018, London — While oil is rebounding from its biggest weekly decline in two years, a surge in U.S. shale still looms over the market.

Futures in New York were up 1.8 percent after tumbling 9.6 percent last week, advancing in tandem with a rebound in global equities. OPEC boosted estimates for rival supplies for the third month in a row as prices encourage U.S. drillers, who have raised the number of oil rigs to the highest since April 2015. Still, OPEC’s president said U.S. shale won’t derail the group’s plan to clear a chronic surplus.

Last week’s tumble reversed the year’s gains in crude after a rout in equities spread to commodities and the U.S. continues to ramp up output. Meanwhile, a weaker dollar that had driven oil’s advance in January has been rebounding this month, cutting market support. American drillers remain the biggest challenge to the Organization of Petroleum Exporting Countries and its allies as they curtail supply to prop up prices.

“Essentially what we see today is a reversal of Friday’s sell-off,” said Giovanni Staunovo, an analyst at UBS Group AG in Zurich. “The overshooting of prices in January has triggered a stronger supply response from U.S. frackers.”

Brent for April settlement was at $63.71 a barrel on the London-based ICE Futures Europe exchange, up 92 cents, and traded at a $3.66 premium to WTI for the same month.

The U.S. oil rig count rose by 26, the most in a year, to 791 last week, Baker Hughes data showed on Friday. American weekly crude output topped 10 million barrels a day for the first time on record, and the government forecasts it will skyrocket to 11 million later this year. The U.S. is now a producer of the caliber of Saudi Arabia and Russia.

“The market will likely be reluctant to rebound too much as the sharp rise in the U.S. oil rig count on Friday has spurred some concerns over whether we will see a rapid increase in U.S. output,” said Jens Naervig Pedersen, an analyst at Danske Bank A/S in Copenhagen.