London — A surge in COVID-19 cases and the emergence of the Omicron variant will dent global demand for oil, the International Energy Agency (IEA) said on Tuesday, but the broader picture is one of increasing output set to top demand this month and soar next year.

“The surge in new COVID-19 cases is expected to temporarily slow, but not upend, the recovery in oil demand that is underway,” the Paris-based IEA said in its monthly oil report.

“New containment measures put in place to halt the spread of the virus are likely to have a more muted impact on the economy versus previous COVID waves,” it said. 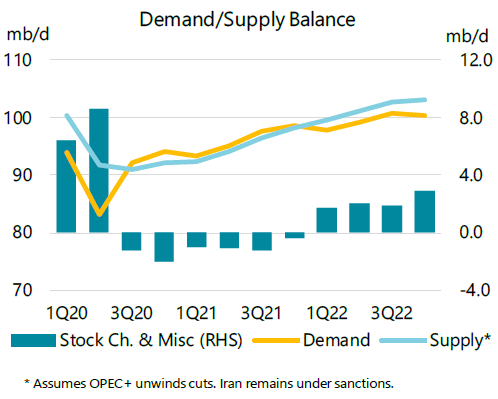 The United States will account for the single biggest increase in output for a second month running, the IEA said, as drilling picks up there.

Next year, Saudi Arabia and Russia could also set records for annual production if the OPEC+ group to which they both belong fully unwinds its agreed production curbs.

Global oil supply could then jump by 6.4 million barrels per day (bpd) next year compared with a 1.5 million bpd increase in 2021.

The IEA lowered its forecast for oil demand this year and the next by 100,000 bpd each, mostly due to the expected blow to jet fuel use from new travel curbs.

Demand for fuels used in road transportation and petrochemical feedstock will continue to rise steeply, however. 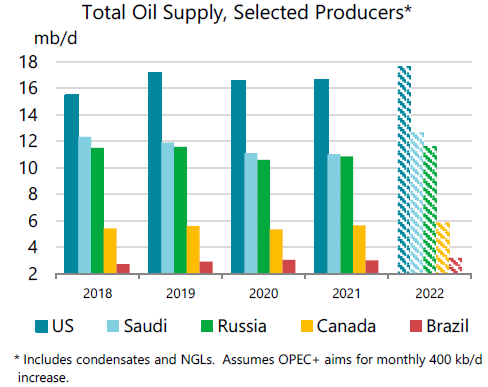 The IEA predictions came a day after producer club OPEC kept its own outlook for 2021 and 2022 unchanged, saying the impact of the omicron variant on demand will be “mild and short-lived”. read more

Global oil supply, up just 1.5 million bpd in 2021, will jump 6.4 million barrels per day next year, the IEA added, and supply will outpace demand through at least the fourth quarter of next year.