on: August 12, 2019In: Community Development, featured 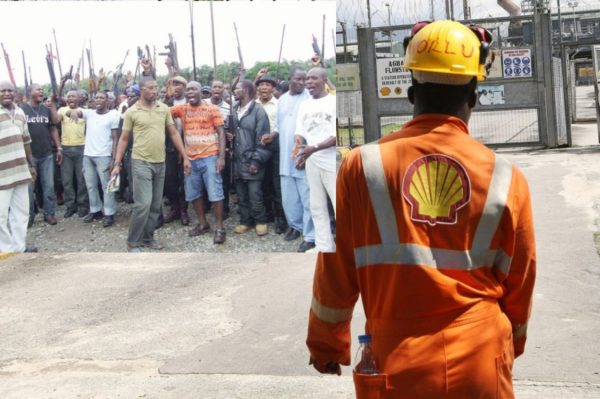 *Two communities in Rivers State, Belema and Offoin-Ama, have this morning shut down operations by oil giant, Shell, at the Belema flow-station known as OML 25.

Port Harcourt — The Shell Petroleum Development Company of Nigeria Limited, SPDC, has denied the allegations that the company was planning to divest its stakes in controversial OML 25, to an indigenous oil firm.

OML25 located in Akuku-Toru Local Government Area of Rivers State has been shut down in the last two years, following the continuous siege on SPDC’s asset in the area – Belema Flow Station and Gas Plant, by the host communities, over alleged undevelopment and neglect by the Dutch multinational.

The host communities of OML25 are also demanding that SPDC should divest it stakes in the block to Belemaoil Producing Limited, an indigenous oil firm owned by an indigene of the community, Jackreich Tein.

Despite the intervention of the Rivers State Government in the face-off, which has led to the signing and payment of N1.2billion GMoU fund to the OML25 host communities by SPDC, the people have remained resolute in their determination not to vacate the facility.

Recently, some stakeholders have accused SPDC of planning to divest its stakes in OML25 to another indigenous oil firm, and also accused the company of deliberately refusing to develop the host communities after operating in the area for 40years and producing over 45,000barrels of oil daily.

But in a swift reaction, the management of SPDC has denied any plans of divesting its stakes in OML25, explaining that the license for OML 25 was renewed by the Federal Government for SPDC in December 2018, and would run for the next 20years.

Asked if the company would divest from the oil block soon, SPDC Media Relations Manager, Mr. Bamidele Odugbesan, said, “No. As has been widely reported, the SPDC JV OML25 has just been renewed by the Federal Government of Nigeria for the next 20 years.

“SPDC hopes that those illegally occupying our Belema Oil and Gas Flowstation will peacefully vacate the location and allow for safe operations of the facility. We hope that they will give the government-led mediation process the support it requires for success.”

On its contributions to the development of OML 25 host communities, Odugbesan said Shell Companies in Nigeria generate revenue for the Federal Government through the taxes, royalties, and levies paid based on the production and supply of energy.

He said since 2002, SNEPCo and SPDC JV have statutorily contributed $2billion to the Niger Delta Development Commission, NDDC, for the development of infrastructure in the Niger Delta region, including the host communities of OML25.

“The SPDC JV and SNEPCo are major gas suppliers to the Nigeria Liquefied Natural Gas (NLNG) (Shell share 25.6%) plant from their onshore and offshore fields. In 2018, NLNG paid approximately $398 million (N120.61 billion) in income tax to the Federal government.”

SPDC also said the host communities of OML 25, including Belema and Offoin-ama have continued to benefit from contract awards, employment of unskilled labour and its social investment programmes, including the yearly award of regular and special scholarships to eligible candidates from the area.

“Despite the challenging environment, the SPDC JV set aside more than N600 million for a five-year period beginning 2014 for development initiatives at Kula and Belema, Offoin-ama and Boro. SPDC JV has also invested over N352 million in improvements in school infrastructure, sanitation and health outreach programmes, construction of walkway for the community and electricity supply in Kula Kingdom in the past 10 years.

“Also, in consideration for competent community-nominated/indigenous contractors, SPDC has awarded contracts for oil and gas production activities that include surveillance contracts awarded to community contractors for wells, pipelines and flowlines Right of Way to indigenes; for the provision of tug boats, houseboats, barges, consumables, marine logistics, etc.

“Community vendor supplies fuel to the houseboats. Due attention is given in registration and recognition to vendors from Belema and Offoin-ama in SPDC database, giving them a stable platform to tender and execute contracts in SPDC operations in other parts of the Niger Delta.