*Belemaoil Producing Limited acquired the entire 40% participating interest in OML-55 from Chevron Nigeria Limited in a competitive bidding process in 2013 .

Port Harcourt — Contractors working for Belemaoil Producing Limited, BPL, operator of OML55, on Wednesday barricaded the entrance of the corporate headquarters of the firm in Port Harcourt, demanding payment for executed contracts.

The aggrieved contractors with banners and placards, took over the entrance gate of the indigenous oil firm, stopping human and vehicular movement to and fro the facility along Odili Road axis of Trans Amadi, Port Harcourt.

Aboyi who described as disheartening the failure of the oil firm to clear debts owe the contracting firms for years, said the development was a mark of neglect by the firm. 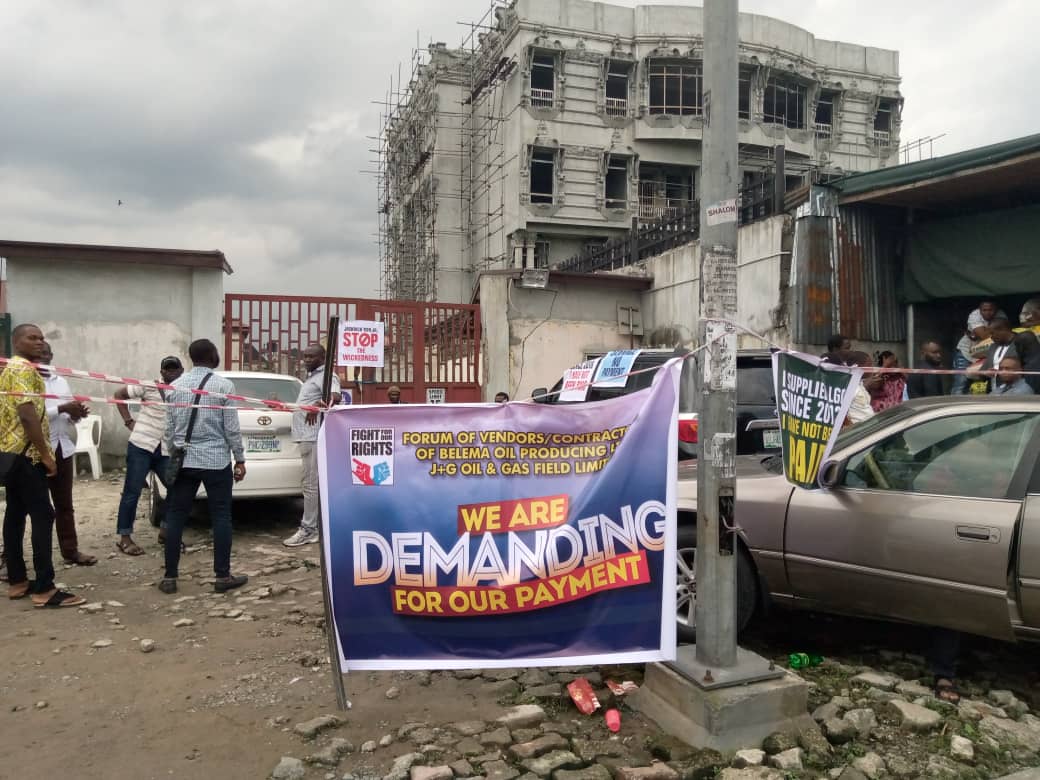 According to him, “We do lubricants and we do chemical supplies and applications to Belemaoil. For a long while now, some as far back as 2012, some others around 2018 till date Belemaoil has been owing us.

“Majority of the people you see here have outstanding payment since 2018. I have one since 2018 February. I have another one since July last year; jobs that have been done. We have continued to service and do inspection but till today we have not received payment.

“Before you’re engage by Belemaoil, the stipulate times that you will be paid for the service order is for 60 days, which means they pay every 60 days.

“But as I speak, some have gone over 700 days, some 1000 days and above no payment. Their sister company J+J Global, that does most of the procurement for Belemaoil is also owing people since 2012.”

Aboyi expressed sadness that contractor were being treated with neglect by an indigenous firms, stating that Belemaoil has shown incompetence in the sector.

“It is discouraging knowing that Belemaoil is an indigenous company. We felt the local content stuff is really gaining ground and for a company like Belemaoil, an oil producing company not even an oil servicing company.

“When they invited us to work here, we felt this was our own, so let’s support their operations and we were patient with them, but over time they have proven to be insensitive and incompetence.

“The Manager has talked to us earlier that they will start payment, but till today, we have not heard from them. We have lost confidence in them.

“We have come out because of their insensitivity to say pay us now. We want them to pay us all they owe us. Ones that is done we are at peace with him.”

Meanwhile, the management of Belemaoil Producing Limited is yet to respond to the protest and the issues raised by the protesting aggrieved contractors.