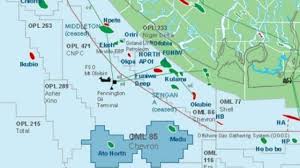 IRM had claimed that First E&P entered the communities and began drilling operations without conducting the mandatory EIA, to determine the health impact of its activities on the host communities.

The group hitherto expressed safety concerns on the rig deployed in the area by First E&P and later withdrew an ultimatum on the grounds that stakeholders had intervened to resolve the concerns, but only to come up again with the same concerns as the company was yet to address them.

Leader of IRM, Mr. Joseph Sese, told our correspondent that the group had to withdraw the ultimatum because they were not driving investment away from their communities while regretting that an EIA has never been conducted on the two oil blocks.

This time around, the group is warning that failure of the management of First E&P to urgently address the issues raised, the group would go into a full-blown public protest with support from international environmental NGOs.

Sese recalled that a rig fire explosion at an oilfield in OML86 operated by Chevron in the area around January 2012 ignited a fire that burnt down the ill-fated KS-Endeavour rig for 48days and devastated the ecosystem.

According to him, “Now First Exploration and Petroleum Development Company acquired OML 83 (Anyala) and OML85 (Madu) oilfields and is now with a drilling rig without due adherence to Nigerian environmental and global landmarks regulating the oil and gas industry.

“The presence of an oil rig in our territory is a sad remembrance of the above-stated gas explosion incidence. It is on record that the initial operators of the field, Texaco and Chevron has no EIA Report on these fields. What Texaco did in 1980 was Risk Analysis and Hazard Assessment. Even during Chevron operations in this field, EIA was missing.

“EIA involves public participation and is not done in secret and such reports are always in the public domain. The only successful EIA in KEFFES coastline was done by SPDC in OML79 fields in 2012 and is there for everyone to see.

“EIA is not an overnight business, if they have any let them come up with it for the public to see in accordance with section 57 and its adjoining subsection and paragraphs of the Environmental Impact Assessment Decree No. 86 of 1992(LFN).”

Joseph Sese also disclosed that the group has written the Nigerian Content Development and Monitoring Board, NCDMB, as well as other relevant stakeholders on the issue.

The issues according to the group are, “The absence of a comprehensive and full Environmental Impact Assessment Report with full public participation which ought to be in public domain before kick-starting the drilling operation.

“The company should display an up to date certification from the Department of Petroleum Resources for the twenty wells it is about to drill in the operation.

“Employment of community liaison officer in each of the host communities, as well as the establishment of the company office in its state of operation.”