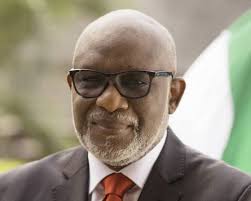 06 September 2018, Sweetcrude, Lagos — Governor Oluwarotimi Akeredolu of Ondo State on Tuesday said that the deep-seaport being proposed by the state government would link the state to the international community.

Akeredolu stated this in Akure at the signing of the consultancy services agreement for the conduct and preparation of feasibility study and conceptual master design for the port.

Mr. Paul Van Eulem, the Managing Director of Maritime and Transport Business Solutions (MTBS), signed for the consulting team while Akeredolu, who was represented by his deputy, Agboola Ajayi, signed for the state government.

The governor said thousands of jobs would be created through the project.

Akeredolu, who described the state as the most peaceful in the Niger Delta, pledged that all stakeholders would be carried along in the execution of the project.

Eulem, on his part, said MTBS would carry out a feasibility study which would last 10 weeks as well as provide the plan and design for the project.

He stated that the proposed port would ease pressure on Lagos port and be financially viable.

Eulem, who said MTBS was well established in building seaports across the world, promised that the company would invest its vast network and knowledge into the project.

The Special Adviser to the Governor on Business Development, Mr. Boye Oyewumi, commended the governor for his efforts to industrialise the state.

Oyewumi, who is also the Chairman of Ondo State Investment and Promotion Agency (ONDIPA), said the project would mark the beginning of the state’s industrialisation process.

“Ondo State is working by making the seaport development a reality.

“Finally, we are there, work has started and we already have 45 consultants on the field working day and night and the Dutch consultants will also join them to do the port feasibility.

“This signifies that the people of Ondo State and the South West, in particular, must get ready because there is a revolution coming.

“When you have a deep-seaport, an industrial city, and a Free Trade Zone all on the same site, then everyone would know we are ready for business.

“There is no part of this country that has those facilities domiciled in the same place as we plan to do here,” he said.

The ONDIPA chairman said that the project would be executed in phases and would take between 10 and 20 years to be completed.

Mr. Gbenga Edema, the Chairman of the Ondo State Oil Producing Areas Development Commission (OSOPADEC), described the project as a landmark initiative in the process of developing the state.

Edema thanked the governor for being committed to his promises of developing the coastal area.

He stated that OSOPADEC was responsible for creating a conducive environment for business to thrive.