OPEC condole with Kuwait on the passing of its Emir 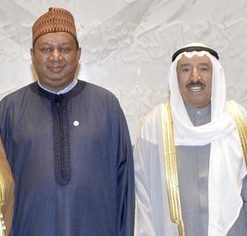 Vienna, Austria — Mohammad Sanusi Barkindo, Secretary General, and the staff at the OPEC Secretariat have offered their condolences to the family, the State of Kuwait and its people on the passing of His Highness Sheikh Sabah Al-Ahmad Al-Jaber Al-Sabah, the Emir of the State of Kuwait.

A statement from the OPEC secretariat disclosed that Sheikh Sabah dedicated his life to the State of Kuwait, as Foreign Minister, Prime Minister and since January 2006 as the Emir. He has provided a steady hand and wise counsel in guiding his country both at home and through the often choppy waters of international affairs.

“He channeled great energies into developing the State of Kuwait, supporting and encouraging its people and has acted as a bridge builder and mediator in helping solve many regional and international disputes. He was renowned for his humanitarian work, which received recognition from such global leaders as former US President, Jimmy Carter, former United Nations Secretary-General, Ban Ki-moon and current UN Secretary General, Antonio Guterres.”

Barkindo said this was a very personal loss, and recalled fondly his meetings with HH Sheikh Sabah over the last four years since his assumption of the office as OPEC Secretary General. “He was always generous with his time, and allowed me to drink from his fountain of wisdom and rich reservoir of knowledge. He was the epitome of humility and a strong defender of OPEC.”

“Sheikh Sabah played a particularly unique role in breaking the impasse in 2016 that paved the way for the historic Vienna Agreement on 30 November 2016 and the Declaration of Cooperation on 10 December 2016. His high-level diplomacy was central to its formation, and he has played an active and extremely constructive role in the years since.”

“The entire OPEC Family commiserates with his family and the great people of the State of Kuwait. We extend our deepest condolences as we mourn the passing of a giant.”