OPEC is now talking about moves to support oil prices

08 November 2018, London — The wind changed again in a stormy oil market as OPEC signaled it will consider a return to cutting output next year, potentially making the second production U-turn this year.

Amid a summer of rising prices and unprecedented political pressure from President Donald Trump, Saudi Arabia, Russia, and other producers had opened the taps. Now, with the U.S. midterm elections over and crude futures wilting in the face of another historic shale oil surge, the cartel will discuss a change, of course, this weekend.

“The message from OPEC looks like: fasten the seat belts,” said Bob McNally, president of Rapidan Energy Advisors LLC, a consultant in Washington. The cartel looks sets to “put pedal to the metal to boost production, and then immediately slam the brakes pretty hard and talk about cutting supply.”

Ministers from the Organization of Petroleum Exporting Countries and its allies will meet in Abu Dhabi on Sunday and discuss scenarios including the possibility of cutting production again next year, according to delegates. Some members are concerned that inventories are rising, they said, asking not to be named because the discussions are private.

If the group, led by Saudi Arabia, does ultimately decide fresh cutbacks are necessary, there are a number of challenges. It will need to once again secure the support of rival-turned-partner Russia, which has less need for high oil prices. There’s also the risk of antagonizing Trump, who repeatedly accused the group on Twitter of inflating prices. 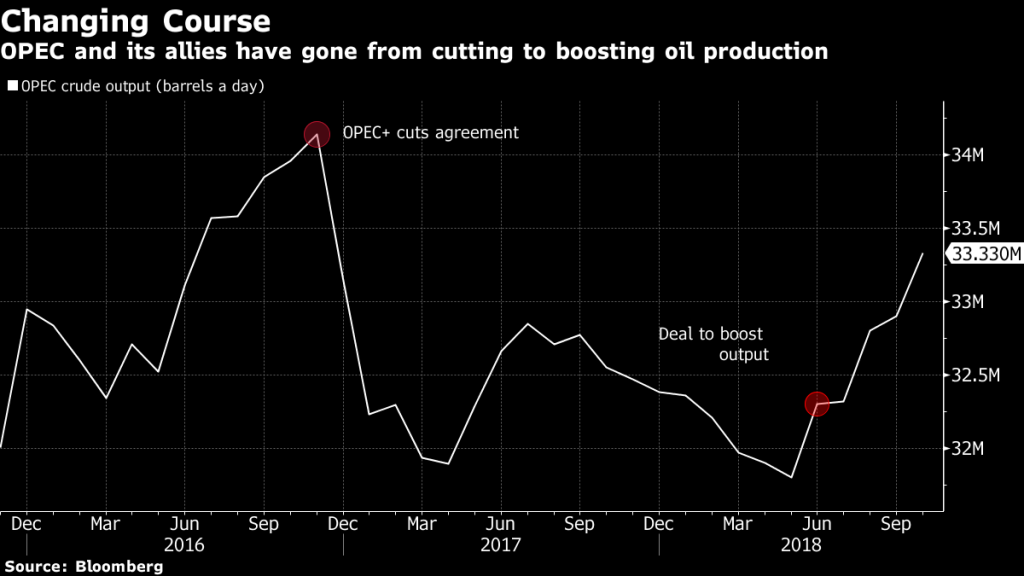 Another reversal would seem to be a far cry from the usual OPEC mantra of preserving stability and careful market stewardship. Yet it does reflect the level of uncertainty in a market experiencing huge shifts in supply and demand.

Earlier in the summer, prices began to surge as the risk of production shortfalls from sanctions on Iran and Venezuela’s economic collapse rattled the market. Losses from those two OPEC members threatened the biggest supply disruption since the start of the decade and Brent crude eventually peaked above $86 a barrel last month.

Since then, big things have happened on the other side of the supply equation. OPEC has been in “produce as much as you can mode” to reassure consumers, according to Saudi Energy Minister Khalid Al-Falih. The kingdom has lifted output close to record levels, while Libya is pumping the most in five years. Unexpected waivers for buyers of Iranian crude have blunted the impact of U.S. sanctions.

Then there’s the small matter of American production growing at the fastest rate in a century, just as fuel demand is at risk from the slowdown in emerging economies and the U.S.-China trade war.

Crude prices already reflect a much weaker outlook for 2019. Brent for January delivery has retreated about 15 percent from a four-year high reached in early October. Prices jumped 1.3 percent to $73.02 at 1:38 p.m. in London on Wednesday.

“They will absolutely want to at some point next year try to arrange a reduction in production,” said Ed Morse, head of commodities at Citigroup Inc. “Everything points to a fairly weak balance: the world economy is decelerating, the China trade tensions are having a visible impact on demand.”

The meeting this weekend of the Joint Ministerial Monitoring Committee, a six-nation body representing the broader 25-country coalition, is intended as just an interim review before all ministers discuss policy next month in Vienna. Still, it could give a strong signal of what’s to come.

There’s a lot to consider before the final decision in December. U.S. sanctions could end up squeezing Iranian output so much that other producers won’t need to cut. Although Washington granted some of Iran’s customer’s temporary waivers that let them keep buying, the Trump administration has said repeatedly it intends to entirely choke off the country’s energy revenues.

Shale has plenty of potential to surprise. In August, the country unexpectedly overtook Russia as the world’s biggest crude producer, with the output of 11.3 million barrels a day. The Energy Information Administration just increased its 2019 production forecast by 300,000 barrels a day to 12.06 million.

Then there are political considerations. Russia, the most important non-OPEC partner in the coalition, has ramped up output since June to a post-Soviet record and President Vladimir Putin said the country is comfortable with crude prices as low as $65.

Saudi Minister Al-Falih discussed the agenda of the Abu Dhabi meeting with his Russian counterpart Alexander Novak by phone on Monday, an official familiar with the matter said, asking not to be identified as the information isn’t public yet. While there has been talking in the market that the group should consider renewed output cuts, Russia currently isn’t ready for such a decision, the official said.

The Saudis may also struggle to persuade the rest of OPEC to back a deal pledging production cuts. Some members, like Iraq, are pressing on with new projects. Others may have grown weary of having their production policy steered by the kingdom.

One member of the cartel, which has been cutting production involuntarily due to U.S. sanctions, appeared to welcome the prospect of other nations doing the same.

“Saudi Arabia and Russia have increased production, and prices have come down $15 a barrel,” Hossein Kazempour Ardebili, Iran’s representative to OPEC, said in an interview. “They have over-balanced the market,” and have no choice but to cut by about 1 million barrels a day, he said.