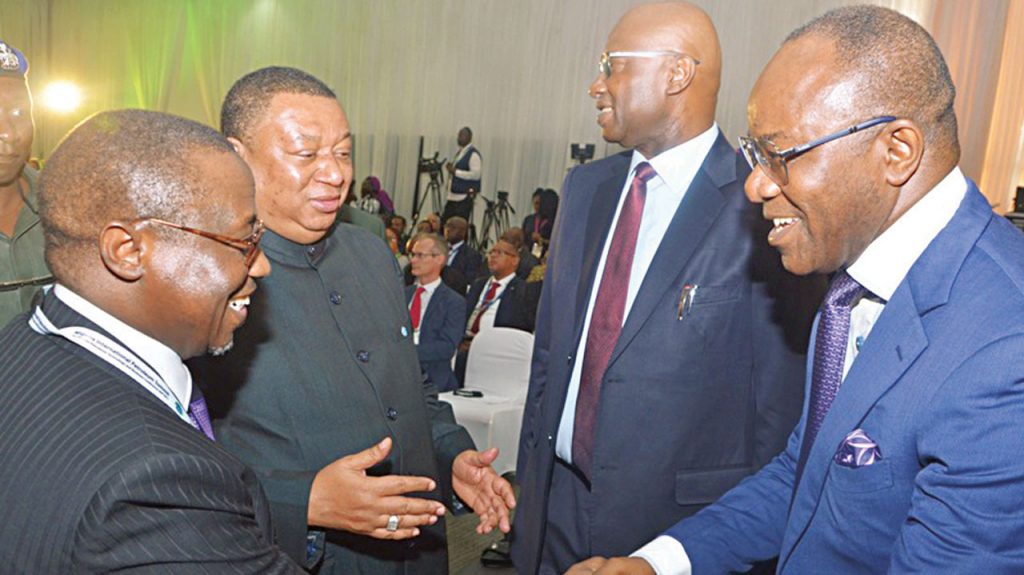 *Dr. Ibe Kachikwu, the Nigeria Minister of State for Petroleum Resources in a handshake with Dr. Maikanti Baru, the GMD of the NNPC, with them is Mr. Mohammed Barkindo, the Secretary-General of OPEC and Mr. Boss Mustapha, the Secretary to Government of the Federation at the ongoing 2018 NIPS, Abuja.

22 February 2018, Sweetcrude, Lagos — The OPEC Reference Basket price fell by an extraordinary 80% between June 2014 and January 2016, Secretary-General of the Petroleum Exporting Countries, Mohammed Barkindo has said.

Barkindo who made the statement in his Keynote address at the maiden edition of the Nigeria International Petroleum Summit, in Abuja, said as a result of the fall, investments were choked-off, with exploration and production spending falling by an enormous 27% in both 2015 and 2016.

“Nearly one trillion dollars in investments were frozen or discontinued, and thousands of high-quality jobs were lost”.

As a result, OPEC and its partners, especially Russia, held a Declaration of Cooperation, agreeing to cut a combined 1.8 million barrel per day of output since January 2017 to boost oil prices.

The agreement which recorded an over 100 percent conformity, has since rallied oil price to $70 per barrel as at January this year.

“A record number of companies in our industry filed for bankruptcy”, he said.

“Our industry was on life-support and a medical breakthrough was necessary to revive it. Thankfully, a breakthrough came in the form of the historic Declaration of Cooperation, which the Minister (Ibe Kachikwu) played a key role in securing the adoption of. This landmark decision was the culmination of the extensive consultations undertaken throughout 2016, which aimed to build consensus about the strategic urgency of rebalancing the global oil market in a collective manner”.

By July 2016, the Organisation for Economic Co-operation and Development, OECD commercial stock levels reached a record high of about 386 mb over the five-year average, he added.
The first Declaration of Cooperation was agreed upon on 10th of December 2016 in Vienna by twenty-four countries.

“If one word was used to describe the impact of the Declaration of Cooperation, it would be ‘transformative.’ A new player has emerged on the global oil scene: the OPEC-non-OPEC strategic partnership; conformity has been at a record-breaking high and the market rebalancing process has gained massive momentum. Not bad for a partnership which many cynics did not think would get off the ground in the first-place!”

“Conformity averaged 107% per month in 2017, across all participating countries. I am pleased to announce that January’s conformity level will be released in a few hours, which will be 133% in January 2018”.