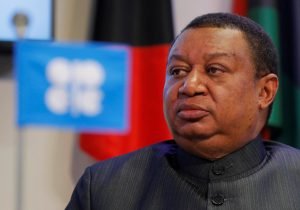 Lagos — Secretary General of the Organization of the Petroleum Exporting Countries, Dr Mohammed Barkindo, says oil and gas are projected to supply over 50 per cent of the world’s energy needs by 2045.

Barkindo revealed this in a special address at the S&P Global Platts Americas Petroleum and Energy Conference, adding that OPEC appreciates that some will dispute this and claim that the organisation is against renewables.”

The energy conference has the theme “The pursuit of global multilateralism to help drive the global energy transition”.

“Oil and gas combined are forecast to still supply over 50 per cent of the world’s energy needs by 2045, with oil at around 27 per cent and gas at 25 per cent. We appreciate that some will view this as an OPEC forecast, dispute the numbers, and state that the Organisation is against renewables,” he said.

Responding to the argument that the oil and gas industries should not be part of the energy future and that the future was one that could be dominated by renewables and electric vehicles,

Barkindo stated: “It is clear that many OPEC member countries have great solar and wind resources, and huge investments are being made in this field. OPEC welcomes the development of renewables.

“However, we do not see any reputable outlook projecting in their base cases that renewables will come anywhere close to overtaking oil and gas in the decades ahead.”

“Renewables are coming of age, with wind and solar expanding quickly, but even by 2045, in our World Oil Outlook 2020, they are only estimated to make up just over 20 per cent of the global energy mix,” he further said.

According to him, renewable energy consumption would not overtake  oil and gas in the decades ahead.