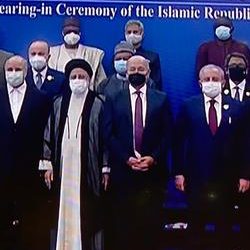 The ceremony was attended by a large number of world leaders, dignitaries and senior officials, as well as heads of international organizations.

Raisi yesterday, in a letter addressed to the Secretary General, thanked the Organization for the efforts it has undertaken to support stability in the global oil market, particularly during the last two years.

The letter was a response to a congratulatory message conveyed by the Secretary General on Raisi’s success in the presidential election.

Earlier today, the Secretary General was received by His Eminence Ayatollah Ahmad Jannaty, Secretary of the Constitutional Council and Chairman of the Assembly of Experts, in his office in Tehran, ahead of the inauguration of the new President.

At the meeting, Ayatollah Jannaty expressed his appreciation to the OPEC Scribe on his visit to Tehran to participate in the inauguration ceremony. He acknowledged with satisfaction the positive role of the Secretary General in helping steer the Organization through the two turbulent oil cycles since 2016.

Ayatollah Jannaty also reiterated the continued support of the Islamic Republic to the Organization’s noble objectives to help maintain stability in the global oil market.

The Secretary General also met with his counterpart Yury Sentyurin, Secretary General of the Gas Exporting Countries Forum (GECF), on the sidelines of the swearing-in ceremony. They discussed the ongoing cooperation between the two Organizations.

IR Iran is a Founder Member of OPEC. The Islamic Republic has also played an instrumental role throughout the consultation and implementation phases of the Declaration of Cooperation between OPEC and non-OPEC oil producing countries.

The Secretary General was accompanied by an OPEC Secretariat delegation.