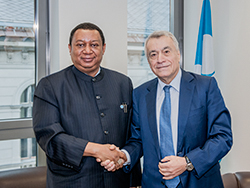 31 October 2016, Sweetcrude, Vienna, Austria — OPEC Secretary General Dr. Mohammad Sanusi Barkindo received Azerbaijani Minister of Energy, Natig Aliyev, and the Ambassador and Permanent Representative of the Permanent Mission to the International Organizations in Vienna, Galib Israfilov, prior to the OPEC–non-OPEC 1st Meeting of the High-level Committee, held at the OPEC Secretariat.

Chairman of the OPEC Board of Governors and Chairman of the high-level meeting Eng. Mohamed Hamel was also present. Non-OPEC countries were invited to join in talks following the Algiers Accord, reached in Algeria on 28 September 2016.

Aliyev said that Azerbaijan is very interested in closer contact with OPEC, adding he wants to increase his knowledge of OPEC’s efforts to stabilize the oil market and find out which role non-OPEC countries can play, including Azerbaijan.

He said OPEC and non-OPEC countries share the same challenges and should seek common solutions, adding that Azerbaijan depends financially on the oil and gas industry. The development of a roadmap is an important next step, he said.

Mr. Hamel stated that OPEC welcomes the participation of non-OPEC countries in the process laid out in the Algiers Accord, particularly on the mandated element of a framework to strengthen OPEC and non-OPEC cooperation. Participant opinions will be included in a report to be considered by Ministers at the OPEC Ministerial Conference on 30 November.

The ongoing meetings and consultations are geared towards joint action and provide direction for developments beyond the upcoming Meeting of the Conference, said HE Mohammad Barkindo. One mandate of the Algiers Accord is to work out a framework for permanent cooperation, he added, which could include dialogue and joint actions.

“The evolving relationship between OPEC and non-OPEC needs to be upgraded within a permanent framework in a structured and timely fashion as mandated by the Algiers Accord,” he said.