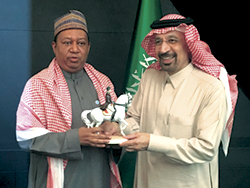 HE Al-Falih also serves as President of the OPEC Conference.

While welcoming the OPEC delegation, Al-Falih commended the Secretary-General for his leadership role as chief executive of the Organization, particularly during the extensive consultations and negotiations leading to last year’s landmark and historic agreements.

Mohammad Barkindo briefed Al-Falih on the OPEC delegation’s visit to the headquarters of Saudi Aramco in Dhahran on Monday. The Secretary-General acknowledged the Minister’s extensive industry experience, which has spanned decades at Aramco, where he has served as both President and CEO. Saudi Aramco is the world’s largest oil and gas company.

The Secretary-General further recognized the Minister’s many contributions to his country and in the fulfillment of his OPEC responsibilities, which have benefitted from his rich reservoir of knowledge and experience, and he urged him to continue assisting the OPEC Secretariat in opening energy dialogues with institutes across the industry.

Mohammad Barkindo also briefed Minister Al-Falih on the OPEC delegation’s visit earlier in the day to the King Abdullah Petroleum Studies and Research Center (KAPSARC), informing him that the OPEC Secretariat and the Center have agreed to build a technical working relationship through joint studies, projects and programmes.

KAPSARC, a global, non-profit institution that conducts independent research on energy economics, collaborates with other international research centers and public policy organizations around the world. Its staff, which is composed of experts and researchers from 15 different countries, works on numerous projects with the purpose of acting as a catalyst for enhanced energy dialogue. Its strategic objectives include developing sustainable economic frameworks that may lead to lower energy supply costs, more effective alignment between energy policy objectives and outcomes, and higher value from energy consumption.

At KAPSARC, the Secretary General and the OPEC delegation were welcomed by the Center’s President, Mr. Samer AlAshgar, and the Director of Research, David Hobbs. They were joined by other senior officials and researchers.

Mr. AlAshgar gave a detailed overview of the Center. Some of the Center’s researchers gave presentations on OPEC spare capacity, energy demand in the transport sector and Saudi Arabia’s vision for 2030.

In his own comments during the visit, the Secretary General recalled the fact that “OPEC’s goal is stability of the oil market.” He said “spare capacity is an insurance against shocks” and noted that it is also in the interests of the global economy – and, in particular, consumers.

Both the Secretary-General and the President of the Center stressed the necessity of ongoing cooperation and dialogue and a regular exchange of information between OPEC and KAPSARC’s researchers – and looked forward to future collaboration.