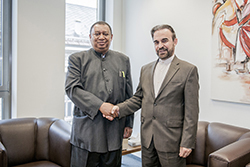 *HE Reza Najafi (right) of Iran and HE Mohammad Sanusi Barkindo.

15 August 2016, Sweetcrude, Vienna, Austria — OPEC Secretary General, HE Mohammad Sanusi Barkindo, received HE Reza Najafi, Ambassador and Permanent Representative of the Islamic Republic of Iran to the United Nations and other international organizations, at the OPEC Secretariat in Vienna, Austria, on 10 August 2016.

During the meeting, Mr Najafi expressed his congratulations on behalf of his government to Mr Barkindo on his being selected as Secretary General of OPEC and conveyed IR Iran’s support for him in his new role heading up the Organization.

Mr Najafi added that IR Iran has always been a steady and loyal supporter of OPEC and its mission to maintain a stable oil market through both challenging times as well as during periods of prosperity. He said that OPEC’s Member Countries had consistently met their goals and overcome hurdles in the past through a unified approach and by working together as a family.

Mr Barkindo conveyed his appreciation for the visit and for IR Iran’s long-time support of OPEC as one of its Founding Members, which, along with Iraq, Kuwait, Saudi Arabia and Venezuela, jointly signed the 1960 resolution establishing OPEC in Bagdad, Iraq.

He added that IR Iran, in addition to its historical role as one of OPEC’s leading oil exporters, was home to one of the world’s most ancient and rich civilizations, dating back nearly 5,000 years. This vast cultural heritage, he said, is an asset, not only to OPEC, but also to the wider world.

Mr Barkindo commented that in his nearly 30 years of experience working in various key roles in Nigeria’s delegation to OPEC, he repeatedly observed IR Iran’s constructive, mature and diplomatic approach to helping OPEC achieve its goals.

He added that he looks forward to continuing this fruitful collaboration with the entire IR Iranian delegation as OPEC moves to meet the challenges in the years to come.

Mr Najafi closed by re-emphasizing IR Iran’s support for Mr Barkindo and OPEC, adding that through dialogue and cooperation among producers and consumers, the prospects would be positive for all industry stakeholders.