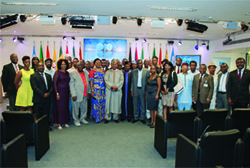 *Members of Nigeria’s community in Austria at the OPEC Secretariat.

16 September 2016, Sweetcrude, Vienna, Austria — OPEC Secretary General, HE Mohammad Sanusi Barkindo, received a group of about 30 leaders from Austria’s Nigerian community at the OPEC Secretariat on Friday 2 September. The Secretary General thanked them for their solidarity and said it was an honour to be “in the midst of brothers and sisters from home”.

The Charge d’Affaires of the Permanent Mission of the Federal Republic of Nigeria to Austria and Slovakia, HE Gazing Jessy Napmwang Dangtim, offered initial remarks, extending a special welcome to the Secretary General on behalf of the entire Nigerian community in Austria. He recalled the Secretary General’s long-time involvement with OPEC, which spans nearly 30 years. This, he said, made Mr. Barkindo the ideal candidate. He then extended his office’s full support to the Secretary-General during his tenure.

Mr. Osaro Osayi, President of the National Association of Nigerian Communities (NANC) in Austria, also pledged to fully support the new Secretary General. He said NANC, which represents Nigerians living in all of Austria’s nine provinces, was proud to see a Nigerian leading OPEC again.

Other leaders of the Nigerian community also had an opportunity to introduce themselves to the Secretary-General, including the heads of Nigeria’s various ethnic groups.

The Secretary General provided the group with a brief overview of the current market outlook, noting, in particular, the impact of the sustained low oil price environment. Given the experience of OPEC Member Countries with boom-and-bust cycles over the years, he said, there is hope for a rebalancing of the market in the near future.

Mr. Barkindo told the group of community leaders that he was honoured by their visit. He vowed to do his best as Secretary General to meet the expectations of OPEC’s Member Countries, including those of his native Nigeria. “For the time that I will be here during my tenure,” he said, “I will do my utmost to live up to your expectations and live up to the expectations of President Buhari and his Minister, HE Kachikwu, who have found me suitable for this assignment.”