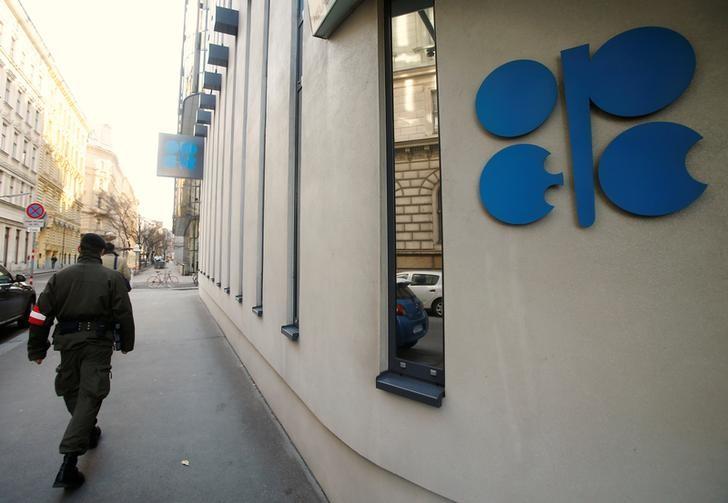 *A soldier patrols in front of the headquarters of the Organization of the Petroleum Exporting Countries (OPEC) in Vienna, Austria. REUTERS/Heinz-Peter Bader.

Lagos — For the coming year, the Organization of the Petroleum Exporting Countries, OPEC forecasts demand growing by at least 6 million barrels per day.

While delivering his opening remarks at the 46th meeting of the Joint Technical Committee Videoconference on Monday, OPEC Secretary-General, Mohammad Barkindo said the forecast of 6mb/d demand growth by next year reflects a downward revision of around 400,000 b/d.

According to him, the prospects for oil demand continues to remain weak.

“We expect demand this year to stay stagnant at about 90 mb/d, which represents a staggering decline of nearly 11 mb/d for the year compared to our January projection”, he said, adding that OPEC’s overall projections are more or less in line with those of the International Energy Agency, whose latest market report alludes to the role of the DoC and its strong conformity levels in helping to stabilise the global market.

Looking at India and China, OPEC said it expects oil demand in these countries to bounce back next year, growing by 14% in India and nearly 9% in China compared to 2020. That translates into combined growth of close to 1.7 mb/d for 2021.

Turning to the supply side, OPEC preliminary data for October shows that Organisation for Economic Co-operation and Development, OECD commercial stocks fell by 39 million barrels to nearly 3.2 billion barrels.

“They are still very high and continue to hover around 208 million barrels above the five-year average. This is a source of concern to all of us, especially given the weakness in oil demand and higher supply volumes that have become more evident in the physical markets,” he said.

On the economy, Barkindo said OPEC continues to foresee global GDP declining by more than 4% this year, a stunning setback when compared to January projection of +3.1% for 2020.

“How times have changed. Our projections reflect a cautious outlook for the coming year, with growth now expected at 4.4% in 2021”.

The forecast for next year represents a healthy rebound, but OPEC said it is nonetheless a downward revision from the 4.5% presented at last month’s meeting.

“India and China are expected to race ahead of global GDP expectations next year, with growth in these two economic tigers on course to rise by nearly 7% in each country”.

“I should add here that our GDP projections are now based on newly implemented 2017 purchase power parity levels as published by the World Bank and International Monetary Fund”, he said.

The Committee reviewed the monthly report prepared by its Joint Technical Committee, JTC, and developments in the global oil market since its last meeting on 19 October 2020, reaffirming its commitment to full conformity.

After reviewing crude oil production data for October 2020, conformity between May and October by participating OPEC and non-OPEC countries was put at 101 percent.

Barkindo said the cuts have contributed to reducing the global supply by approximately 1.6 billion barrels, including voluntary adjustments, and this has been key to the rebalancing of the market. Moreover, countries compensated a total of 768 tb/d to make up for previously overproduced volumes. This led to achieving a level of 99.5% of the production adjustment commitments since May.

“The Committee expressed its appreciation to the participating countries, particularly to the UAE and Angola, which has performed beyond expectation, while reiterating the critical importance of adhering to full conformity and compensating the overproduced volumes, in order to achieve the objective of market rebalancing and to avoid undue delay in the process”.

He urged all participating countries to be vigilant, proactive and be prepared to act, when necessary, to the requirements of the market.

The Committee’s recommendations will be provided to 12th OPEC and non-OPEC Ministerial Meeting, which is scheduled to take place by videoconference on 1 December 2020.