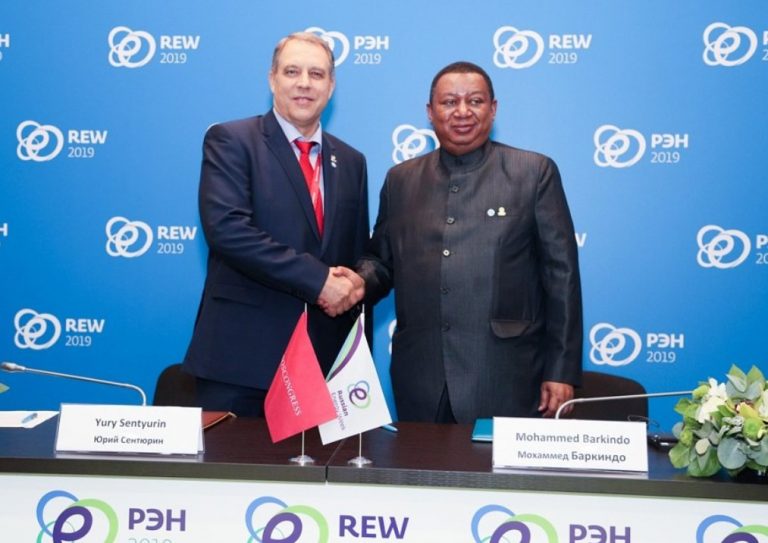 Lagos — The Secretaries-General of the Organization of the Petroleum Exporting Countries, OPEC, and the Gas Exporting Countries Forum, GECF have signed a Memorandum of Understanding, MoU to strengthen cooperation in research and the sharing of best practices.

Sanusi Barkindo, Secretary-General of OPEC, and his GECF counterpart, HE Yury Sentyurin, signed the MoU on the sidelines of the Russian Energy Week forum in Moscow.

“We look forward to utilise the framework we signed today in our MoU to deepen discussions, as well as undertake joint work and actions, in the interest of our members, entire industry, and the global economy”, Mr. Barkindo said at the signing ceremony. “It is the mainstream consensus that oil and gas together will continue to be the fuel of choice for the foreseeable future. In fact, most projections validate that oil and gas will continue to dominate energy basket.”
Algeria, Equatorial Guinea, IR Iran, Libya, Nigeria, the United Arab Emirates and Venezuela are members of both Organisations.

Mr. Barkindo echoed the remarks of Mr. Sentyurin that today’s signing ceremony is a milestone in the evolving productive relationship between OPEC and GCEF that started two years ago.

The purpose of the MoU is to establish and strengthen cooperation in order to carry out activities and share experiences, views, information and best practices in areas of mutual interest.

Areas of cooperation identified in the MoU include energy market monitoring, analysis, modeling, and forecasting; energy market research studies covering the short-medium- and long-term, and their methodologies; energy market data and statistics, data and statistical operational topics (such as methodologies of data gathering, assessment, and dissemination); energy initiatives and developments aimed at sustainability, along with environmental and social responsibility; and other areas and matters involving common interests and concerns.

OPEC and GECF also agree to cooperate, where possible and appropriate, on the exchange of information and data; hold expert meetings and internal bilateral workshops to promote the exchange of knowledge and experiences, and cooperate on seminars, workshops, conferences, and publications.

In addition, OPEC and GECF may further identify any other appropriate means to further their cooperation.

The MoU follows discussions that took place earlier this year between the Secretaries-General on the sidelines of the 9th IEA-IEF-OPEC Symposium on Energy Outlooks. The symposium took place at the International Energy Forum, IEF Secretariat in Riyadh, Saudi Arabia.

At their meeting of 27 February 2019, the Secretaries-General recognised the numerous areas of mutual interest to both Organisations, including the fact that they have many member countries in common. They emphasised their desire to continue working closely together, both at a high-level, as well as on a technical level.

OPEC, based in Vienna, Austria, is an intergovernmental organization with nearly 60 years of successful experience in the coordination and unification of the petroleum policies of its Member Countries and in ensuring the stabilization of oil markets in order to secure an efficient, economic and regular supply of petroleum to consumers, a steady income to producers and a fair return on capital for those investing in the petroleum industry. OPEC was created during the Baghdad Conference of 10-14 September 1960 by IR Iran, Iraq, Kuwait, Saudi Arabia, and Venezuela.

GECF, with headquarters in Doha, Qatar, is an international governmental organization established with the aim to support the sovereign rights of its Member Countries over their natural gas resources and their abilities to develop, preserve and use such resources for the benefit of their peoples, through the exchange of experience, views, information, and coordination in gas-related matters. GECF was established during the First Meeting of Ministers held in Tehran, IR Iran, on 19-20 May 2001.