11 November 2018, London — Many OPEC and allied oil producers see a need to cut output to stave off a new surplus, a key member of the coalition said, as delegates gathered in Abu Dhabi amid sinking prices.

“I think probably there is support that right now there is too much oil in the market and stock, inventories are building up,” Al-Rumhy told reporters on Sunday in Abu Dhabi, capital of the United Arab Emirates.

A technical committee representing the coalition projected that a global oil surplus will resurface in 2019 if they continue pumping at current rates, according to delegates familiar with its conclusions. Nonetheless, Saudi Arabia’s Energy Minister Khalid Al-Falih, representing OPEC’s biggest member, said ahead of Sunday’s meeting in Abu Dhabi between the Organization of Petroleum Exporting Countries and its allies that it was “too premature” to discuss cutting output.

A production cut in 2019 by the OPEC+ producers cannot be ruled out, Magzum Mirzagaliev, Kazakhstan’s deputy energy minister, told reporters in the U.A.E. capital. Russia isn’t ready to disclose its position on whether the group should reduce output further before the committee’s meeting, according to a person familiar with the matter.

OPEC and its allies meet under mounting pressure to consider renewed production cuts after a slump in oil prices. Crude on both sides of the Atlantic tumbled Friday as the U.S. reported rising stocks and Washington granted waivers that lessen the impact of sanctions on Iranian exports. Brent plunged below $70 a barrel for the first time in six months, shedding 4 percent last week. West Texas Intermediate futures also tumbled, by about 5 percent.

The OPEC+ Joint Technical Committee, which met for talks ahead of Sunday’s meeting, has given a preliminary 104 percent compliance rate to its cuts deal in October, according to a delegate. The producers exceeded their targets in September– complying at 111 percent — and have agreed to boost supply by restoring compliance to 100 percent.

The International Energy Agency has repeatedly called for OPEC to open the taps to ensure global demand for crude is met. IEA Executive Director Fatih Birol has spoken of the market entering “a red zone” if output losses from Venezuela and exports from Iran are not offset.

The producer group and its allies have been ramping up output rapidly since May, responding to pressure from U.S. President Donald Trump and making up for supply losses from Iran and Venezuela. Now, they’re considering a U-turn.

Sudden Reversal
“There’s too much in the market, and we’re going to go back where we were if we’re not careful,” Al-Rumhy said, referring to a price slide in 2014 that spurred producers to limit production starting in January 2017.

On top of the danger of overproduction, there’s also the risk to demand from faltering emerging-market economies and a trade war between the U.S. and China. 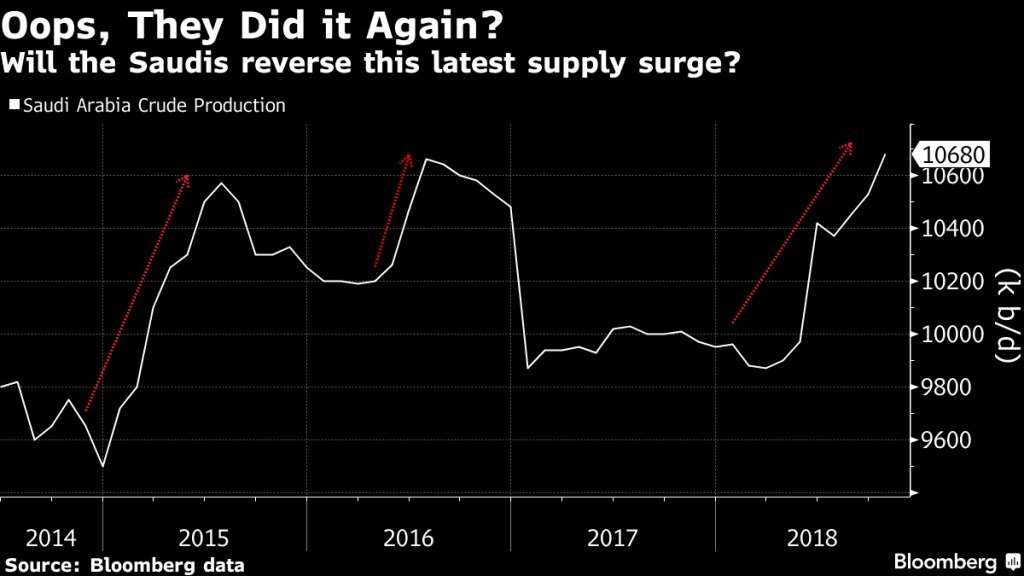 If the group does decide fresh cutbacks are necessary, it would mark its second production U-turn this year. For Saudi Arabia — the world’s biggest crude exporter — it would be the third time in recent years that the kingdom has delivered a supply surge only to quickly reverse it.

A number of challenges remain. The Saudis will need to once again secure the support of rival-turned-partner Russia, which has less need for high oil prices. There’s also the risk of antagonizing Trump, who has repeatedly accused the group of inflating prices.