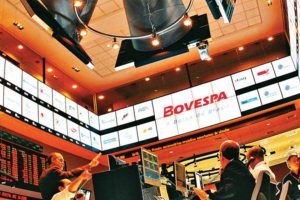 Monthly options contracts on the Bovespa expire on Monday, which brought significant volatility to the market, particularly in morning trade, traders said. Given the technical nature of the gains, they said the Bovespa’s rally was relatively fragile.

Overall, the Bovespa climbed 1.77 percent, despite opinion polls showing that a presidential election runoff between the hard-right and hard-left candidates is increasingly likely.

“With the growth of Fernando Haddad’s candidacy and Ciro Gomes staying at the same levels, time is running out every day for the other candidates to make the run-off,” analysts at BTG Pactual wrote in a note to clients, referring to two leftist candidates who have spooked markets.

One of the two is seen as increasingly likely to face the far-right’s Jair Bolsonaro in a runoff.

Across Latin America, most currencies climbed modestly against the dollar with the exception of the Chilean peso and the Peruvian sol, which were flat.

Political tensions are rising in Peru after President Martin Vizcarra dared lawmakers to dismiss the entire cabinet late on Sunday. Under Peru’s constitution, the move could lead Vizcarra dissolving Congress.

The Mexican peso strengthened 0.24 percent as investors waited for U.S. President Donald Trump to announce his latest plans for tariffs on Chinese imports.