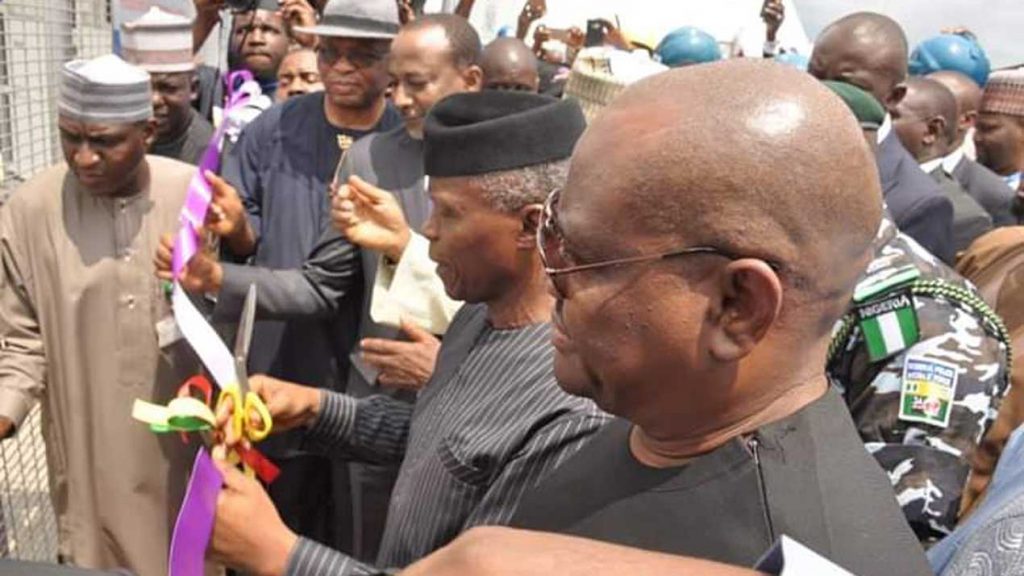 The multi-purpose facility which is built on the Build, Operate and Transfer (BOT) agreement ACPML signed with the Federal Government is situated in Port Harcourt Dockyard, Port Harcourt Rivers State.

Osinbajo reiterated the commitment of the Federal Government to the ideals of the environment, maritime and the oil and gas industries in the policies formulation and implementation of the President Muhammadu Buhari’s administration.

He stated that the unveiling of the plant was significant in many ways as it would help Nigeria to meet global standards and practices as prescribed by the various conventions and guidelines of the United Nations, UN, specialized agency, the International Maritime Organisation, IMO.

His words: “I am happy to note that as a wholly indigenous firm, African Circle Pollution Management Limited has kept to its own side of the provisions of the agreement and I want to assure you that the Federal Government under the watch of President Mohamadu Buhari will not relent in its efforts to ensure it lives up to expectations by doing its own part. I want to encourage African Circle Pollution Management Limited to do more in the other navigational districts by ensuring that similar facilities are put in place. By so doing, the nation’s seaports will be in a vantage position to offer similar services to vessels calling in Nigeria’s territorial waters. There is no doubt that this is the way to go if Nigeria’s quest to be a maritime hub in the West and Central Africa Sub-Regions can be actualized”.

He expressed delight that ACPML as an indigenous waste management organization saddled with the responsibility of collection, storage, processing and disposal of ship-generated waste in the country has not looked back since it began operation over a decade ago.

Similarly, Chairman of ACPML, Abdulsalam Abubakar said the building of the waste treatment plant was part of its contractual agreement with the Nigerian Ports Authority (NPA) and its commitment to a cleaner maritime environment in line with global standards and practices.

According to him, the liquid waste treatment plant is not only fully automated but has the capacity to handle several functions that vital to the delivery of ACPML mandate.

Former Governor of Ogun State and a member of the Board Management Committee (BMC) of ACPML, Chief Olusegun Osoba, in his remarks disclosed that the plant cost the company about $8 million USA dollars.

He commended the Managing Director of the NPA, Ms. Hadiza Bala Usman for the support she has been giving to the company since her appointment as the boss of the government agency.

According to the former governor, unlike in the past, Usman has been prompt in addressing the challenges facing the firm especially in the release of its trapped funds.

He enjoined the Rivers State Governor, Chief Nyesom Ezenwo Wike to help in the provision of land required for the building of ACPML facility in Bonny Island, Rivers State, even as he revealed that the landowners had made things difficult for the firm.

Wike in his response expressed his willingness to support ACPML to deliver on its assignment on the condition that the company employs indigenes of Rivers State in its facilities.

He expressed dismay that NPA has not lived to expectations by providing its own counterpart funding for the construction of the road leading to Port Harcourt Dockyard despite an agreement to that effect.

He urged NPA Executive Director, Marine, and Operations, Dr. Sokonte H. Davis who is an indigene of Rivers State to use his good office to ensure that the government agency does what it is expected of it for the state.