on: November 14, 2017In: Community Development, featured 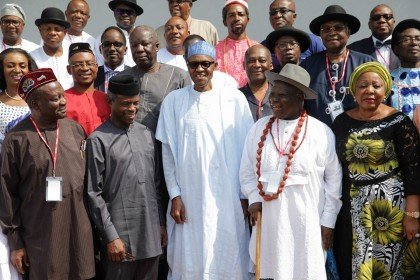 14 November 2017, Sweetcrude, Port Harcourt — The Pan-Niger Delta Leadership Forum has dismissed claims in some quarters that it is being funded by some oil companies operating in the Niger Delta region.

The denial comes after speculations that the activities of the youth forum was being funded by some international oil firms, including meetings and accommodation of members of the forum when they have a meeting.

But PANDLEAF which is the youth wing of Pan Niger Delta Elders Forum, PANDEF, described the allegation as unfounded, adding that the group would not approach any oil company for funding.

Speaking to newsmen in Port Harcourt, PANDLEAF Leader, Mr. Famous Daunemigha, explained that the Governors of Bayelsa State and Delta State, Seriake Dickson and Ifeanyi Okowa respectively, had been assisting the forum with logistics and accommodation.

Daunemigha also disclosed that apart from individual contributions from members of the forum, the Niger Delta Development Commission was also assisting the group.

“There is no substance in such an allegation that oil companies are funding PANDLEAF. If it is true, you would have heard members taking N1 million each or N500,000 each; you would also hear that PANDLEAF had received accommodation allowance for its members from oil companies.

“PANDLEAF is funded by individuals only like Governor Seriake Dickson that assisted in logistics in terms of accommodation of delegates. Governor Ifeanyi Okowa has also assisted us.

“In Rivers State, NDDC recognises the role being played by PANDLEF and it (NDDC) assisted us in accommodation and logistics. Those are the sources of PANDLEF funding.

“Why would oil companies fund us when we are fighting that they must relocate their headquarters to the Niger Delta? How can they fund people who are fighting them? The allegation is unfounded,” Daunemigha stressed.

He, however, urged the people of Niger Delta to dismiss such speculations, adding that PANDLEAF would continue to remain focused on achieving its objectives for the benefit of the region.