*Time is running out for OPEC and its partners to manage the oil market disruption caused by the coronavirus in an orderly way.

London — Just when OPEC needs all the agility it can muster in the face of an oil demand shock of uncertain severity and unknown duration, it’s bogged down in protracted negotiations and a 60-year-old mechanism for deciding output allocations that’s far too cumbersome in a time of crisis.

The 13 oil-exporting nations in the cartel, and their partners in what’s called OPEC+, have to be able to react quickly to the rapidly-changing world around them. Instead, they are locked in a debate over whether they should even meet, and what they should agree on if they do. By the time they get answers to those questions, it may already be too late. 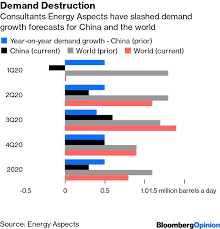 A week ago Saudi Arabia, OPEC’s biggest producer, was pressing for meetings scheduled for March to be brought forward so everyone could agree on deeper output cuts to halt the slide in oil prices triggered by the outbreak of a new coronavirus in China. Russia, the largest of the wider group’s non-OPEC members, was pushing back, arguing that more time was needed to assess its impact on oil demand. Since then, the cartel’s Joint Technical Committee met over three days and put forward a proposal to remove a further 600,000 barrels a day in the second quarter of the year.

That proposal is still sitting on the table waiting for action. Russia said it would respond to the suggestion in days, but the world is still waiting. Oil ministers from the combined 23 countries have yet to agree if they will meet before March. As each day passes, there is less point in moving the gathering.

But if the group doesn’t act soon, it will find the decision taken out of its hands. Having floated the idea of further cuts they now need to deliver. Anything less will likely send prices down again.

The thirst for oil in China, the world’s biggest crude importer, is drying up rapidly as the response to the virus outbreak has seen industry shuttered and travel restricted. Data intelligence firm Kpler notes that imports averaged about 8 million barrels a day in the week through Jan. 29, down 27% from the first half of the month. The Lunar New Year holiday may have contributed to that slowdown, but the virus has slashed demand by about 20%, according to people with inside knowledge of the country’s energy industry, and China’s refiners have cut the amount of crude they are processing by at least 2 million barrels a day. 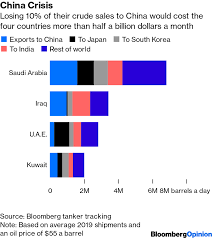 Consultants have slashed forecasts for oil demand growth for China and for the world as a whole. Energy Aspects now see China’s demand falling year on year in the current quarter and no increase at all in oil use worldwide. The three big oil forecasting agencies will publish their monthly outlooks this week. Demand projections are sure to be cut.

If OPEC+ doesn’t agree output cuts, China may force them upon it. Persian Gulf producers are currently taking nominations from buyers for the volumes they want in March. China seems to be pushing the flexibility of its term contracts to the hilt, seeking reduced volumes from all of its main suppliers. The four big Persian Gulf exporters could see requests from China down by 10%. That would cost them more than half a billion dollars a month at current oil prices of about $55 a barrel — no wonder they’re in a panic.

Their added worry is that there are other forces at work that could drive up the global supply of oil in the coming weeks. More than 1 million barrels a day of shut-in production from Libya could return rapidly if a United Nations conference in Cairo later today brokers a deal that allows the country’s ports to reopen.

Meanwhile, OPEC’s attempt to talk oil prices higher isn’t working. In early January, Brent was around $65 a barrel. By the final week of the month it was trading in a range between $58 and $60 a barrel as the group hemmed and hawed about bringing forward the March meeting. Last week, as the OPEC+ technical committee met but the prospect of a ministerial gathering receded, prices took another step down to between $54 and $57 a barrel. If China asks for less oil, or tensions in Libya ease, prices are likely take another tumble next week. 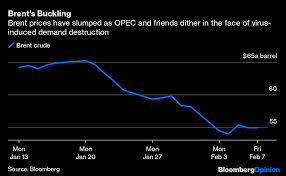 The expansion of OPEC into OPEC+ has added a new layer of complexity to the decision-making process while contributing little in the way of real output cuts. Several non-OPEC members, including Mexico and Azerbaijan, are merely dressing up natural output declines as cuts, while others are ignoring their pledges. Russia remains a difficult friend, as my colleague David Fickling notes here. Wider membership is undermining the producer group’s ability to respond quickly to crises like the coronavirus.

Let’s be honest, the only countries that really count in terms of being able to boost supply in times of shortage or being willing and able to cut production in a glut are Saudi Arabia, the United Arab Emirates and (perhaps) Kuwait. A smaller, more focused group of countries whose actions can have a an immediate impact may serve as a better regulator of oil market balance than an expanding gaggle of small producers who add little but noise.

This column does not necessarily reflect the opinion of Bloomberg LP and its owners.

*To contact the author of this story:
Julian Lee at [email protected]