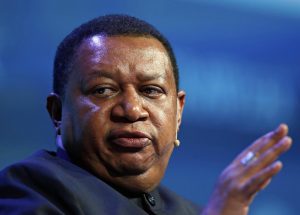 14 April 2018, Sweetcrude, Lagos – Secretary-General of the Organisation of the Petroleum Exporting Countries, OPEC, Mohammad Barkindo, has said crude oil in storage tanks across the globe has shrunk by 357 million barrels since the commencement of the OPEC and non-OPEC nations’ oil cut agreement in January 2017.

In an interview with Reuters in New Delhi, Barkindo said the glut dropped from about 400 million barrels to 43 million barrels, calculated to be above the five-year average.

“We have seen an accelerated shrinkage of stocks in storage from unparalleled highs of about 400 million barrels to about 43 million above the five-year average,” he said.

OPEC and its partners, especially Russia, in a Declaration of Cooperation, DoC, agreed to reduce output by 1.8mp/b.

“We have achieved an over 150 percent conformity level,” he added.

Addressing speculations that the pact may be extended into 2019, Barkindo said this was likely, but added that the possibility of an extension will be discussed at its next meeting in June in Vienna.