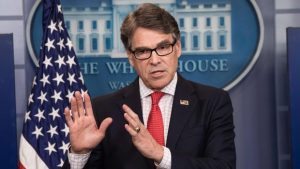 14 September 2018, Moscow — Saudi Arabia, other members of OPEC and Russia are to be admired for trying to prevent a spike in oil prices, U.S. Energy Secretary Rick Perry told reporters after meeting Russian Energy Minister Alexander Novak in Moscow.

U.S. sanctions on Iran’s energy industry, which come into force in November, have already cut supply back to two-year lows while falling Venezuelan output and unplanned outages elsewhere will also keep the supply-demand balance tight, the International Energy Agency said on Thursday.

“The kingdom (Saudi Arabia), the members of OPEC that are opting their production to be able to make sure that the citizenry of the world does not see a spike in oil price … are to be admired and appreciated, and Russia is one of them,” Perry said.

The United States, Russia, and Saudi Arabia are also working together to make sure the world has access to affordable energy, he added.

Oil prices fell on Thursday, slipping back from four-month highs as investors focused on the risk that emerging market crises and trade disputes could dent demand even as supply tightens.

Russia’s Novak said earlier this week that his country could raise output if needed and warned of uncertainty on the market due to the upcoming U.S. sanctions against Iran’s oil exports.

In September, the Middle East-dominated Organization of the Petroleum Exporting Countries and a group of non-OPEC producers, including Russia, will meet in Algeria to discuss the market situation.

During the meeting with Perry, Novak said he proposed creating a joint investment fund to develop new projects, adding the Russian Direct Investment Fund (RDIF) could be part of such a fund.

The RDIF supports this idea and will propose possible parameters for such an arrangement soon, it said in a statement.

Perry and Novak also touched on the topic of gas pipeline project Nord Stream 2. In July, Washington repeated a warning to Western firms invested in the pipeline that they were at risk of sanctions, saying Moscow was using the project to divide Europe.

Novak said it was a “commercial project”, which Russia hoped would continue to be developed and that the United States would approach rationally.

Perry did not rule out the introduction of sanctions against Nord Stream 2, but said neither leaders of the two countries nor their energy ministers, wanted to get to the point where sanctions against the project would be engaged.