Lagos — Petrochemical projects are expected to drive the commencement of upcoming projects across the oil and gas value chain in Saudi Arabia, accounting for around 61% of the total projects expected to start operations during the period of 2021 to 2025.

Among these, new build projects dominate with 84%, while the rest are expansion projects, according to GlobalData, a leading data and analytics company.

GlobalData’s report, ‘Middle East Oil and Gas Projects Outlook to 2025 – Development Stage, Capacity, Capex and Contractor Details of All New Build and Expansion Projects’, reveals that petrochemical projects will be the highest with 50, followed by midstream with 18, refinery at eight, and upstream (fields) at six.

Soorya Tejomoortula, Oil & Gas Analyst at GlobalData, comments: “Saudi Arabia’s aggressive investments in the petrochemicals sector is part of its 2030 vision plan, where the country aims to reduce its dependence on the upstream sector and diversify into other segments. The state-owned company, Saudi Aramco, already acquired 70% stake in the country’s petrochemical giant, Saudi Basic Industries (SABIC), last year for approximately US$69bn as part of its strategy to diversify from the upstream sector.” 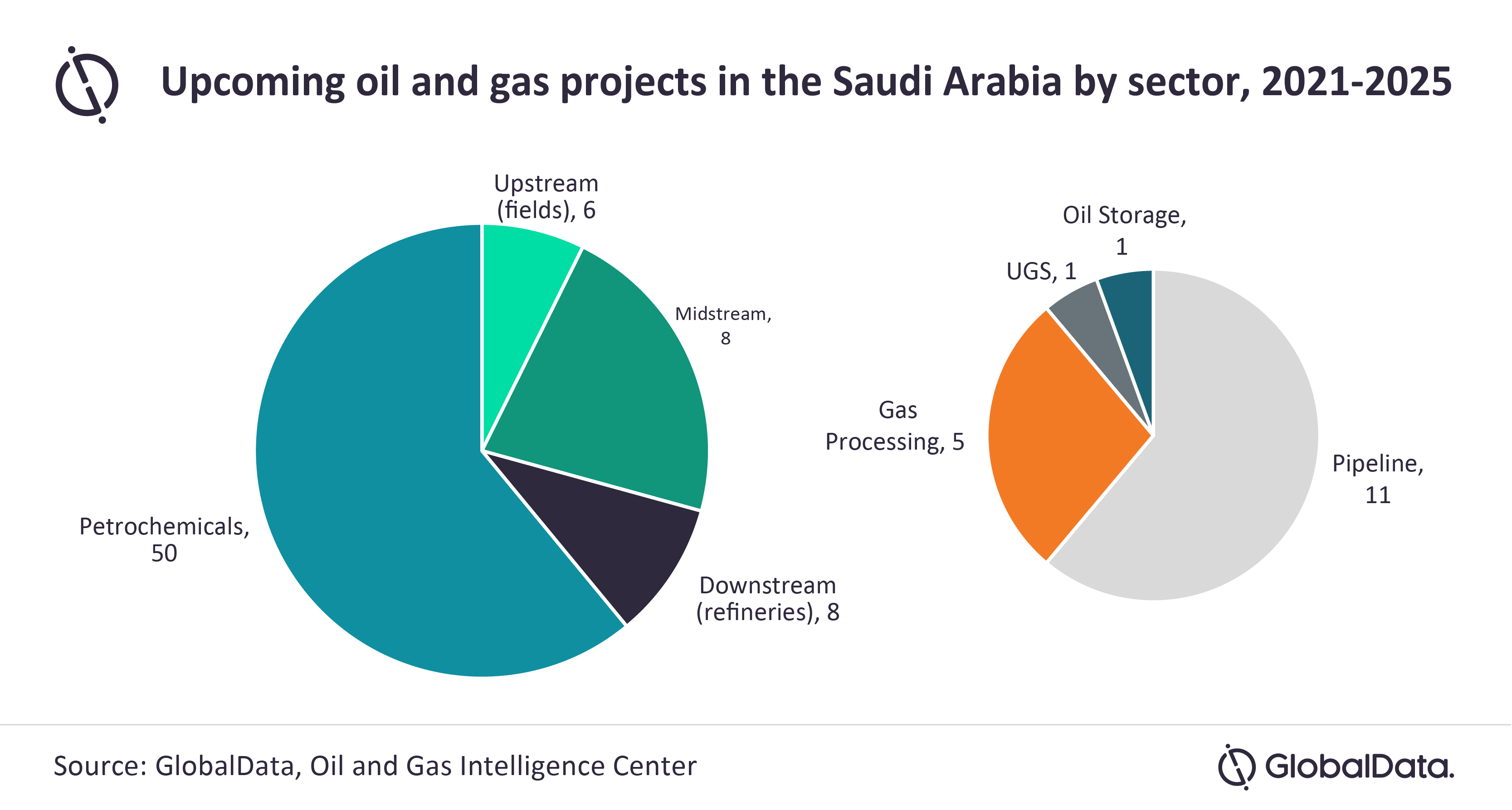 Among upcoming petrochemical projects in Saudi Arabia by 2025, Saudi Aramco Total Refining and Petrochemical Company, Al-Jubail Ethylene Plant, is a major project with a capacity of 1.50 mtpa and costing US$1.6bn. The plant provides feed stock to other petchem and speciality companies in the Jubail industrial city.

GlobalData also notes that 18 midstream projects are expected to start operations in Saudi Arabia during 2021 to 2025. Some of the key midstream projects expected to start operations by 2025 include the Tanajib gas processing plant with a capacity of 2.8 billion cubic feet per day and a project cost of US$3.5bn, and Hawiyah Unayzah underground gas storage site costing US$2.1bn. The gas processing plant is part of expansion of the Tanajib oil project, while Hawiyah Unayzah underground gas storage site helps to meet seasonal variations in gas demand in the country.

Tejomoortula continues: “In the upstream (fields) segment, Jafurah is a key upstream production project, which is set to begin operations with a total production capacity of 916.7 thousand barrels of oil equivalent per day. The project, considered as the largest unconventional gas development in Saudi Arabia, will provide additional gas for domestic consumption and valuable feedstock to petchem projects.”