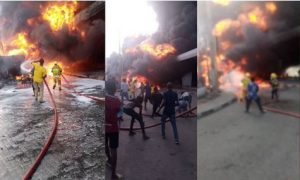 Port Harcourt — Two separate petrol fire explosions on Thursday razed over 10 houses, farmlands and economic trees in Mgbere and Ohionu villages in Ibaa community, Emohua Local Government Area of Rivers State.
The fire explosions, according eye witnesses, began in the early hours of Thursday, when a truck laden with suspected illegally refined petroleum product exploded in Mgbere, burning down over 10 residential buildings, including eight shops.
Another truck with suspected illegally refined product hit a building in Ohionu village, leading to a fire explosion which razed over five buildings and properties worth millions of Naira in Ibaa community.
A victim of the fire explosion, Mr Iheamnachor Didi, said while no life was lost, the damages caused by the fire incident was massive, as illegal crude oil refining activities were still ongoing in the area, despite the fight against illegal oil bunkering and refining activities in the state by Governor Nyesom Wike.
“There was a truck that came to carry illegal refined products (Kpofire) at Ibaa and the products in the vehicle caught fire and exploded in Mgbere village at about 2 a.m.
“When the vehicle caught fire all the buildings around that place were burnt down. More than eight shops and 10 buildings were razed down. My sister’s house was badly affected as we didn’t remove any properties from the building but no life was lost.”
Didi regretted that every effort by the state government to stop the oil bunkering business was futile in the area.
“As I am talking to you, they are still doing the business. They are offloading product. The governor said they should stop the bunkering activities but they refused. This illegal activity is heavily practiced in Ibaa, Elele and Rumuekpe. The business is still going on.”
In Ohionu village,  no life too was lost but an eye witness, Uchendu Dave, said many persons from the community have been displaced as a result of the fire explosion.
“When the tanker collided with the building there was fire which razed down over 10 houses and destroyed properties worth millions of naira. It took the intervention of the youths to put off the fire that lasted for over six hours.
“Hundreds of persons have been displaced as a result of the incident. What made the fire to be severe was because some of the affected buildings have suspected illegal refined products stored around the vicinity. But no life actually lost.
“There is suspected illegal refinery dump in the community and the tanker may have loaded from one of the illegal refinery site.”