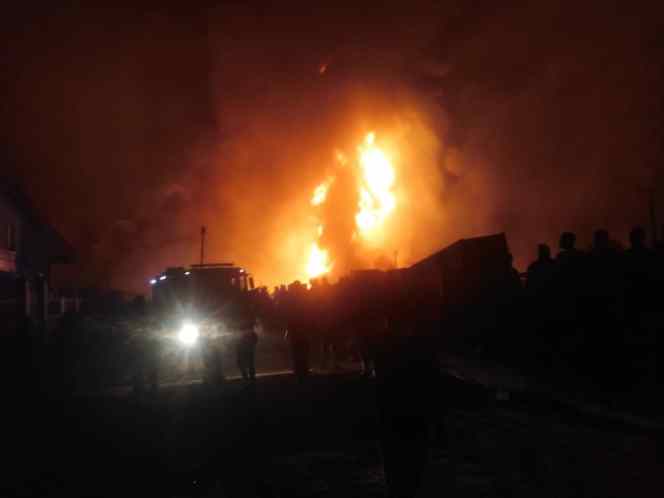 Lagos — No fewer than three persons have been reported dead as a result of a pipeline explosion at Eroko Road, Abule Egba, Lagos.

Flames from the fire as at the time of filing the report sent thousands of residents running to safety, while many have deserted their homes.

Uncountable trucks and houses were burnt to the ground, with many injured in the inferno.

The Lagos State Emergency Management Agency, LASEMA said the explosion was a result of a vandalised NNPC pipeline in the area.

SweetcrudeReports learnt that the fire broke out at Ile-Epo Bus Stop along Abeokuta Expressway, and had to Abule Egba before another explosion was heard in densely populated Fagba and Ekoro Road.

As at the time of filing this report, the Nigerian National Petroleum Corporation, which feeds the pipelines, has cut supplies to the lines to curb the fire.

Emergency officials were also said to have been mobilised to the area to attend to victims.

A similar explosion from damaged pipelines killed over 700 people in December 2006 in Abule Egba. Another explosion occurred in December 2018 at the same neighbourhood, but with fewer casualties.

Recounting his experience, Nosa Okunbor, the spokesperson for LASEMA, said “two adult males and an infant lost their lives while 11 trucks laden with 40feet containers were destroyed and seven buildings razed down by the inferno.”

“Though preliminary report on the Ilepo fire outbreak had it that it was a pipeline fire which cause could not be ascertained, however, Situational Report from further investigations later revealed that the inferno was as a result of pipeline vandalism,” he explained.

Okunbor added that the swift response of firefighters, first responders and LASEMA team led to the explosion being successfully curtailed.

“The inferno has been completely put off with details revealing that the valve where the vandalised petroleum products emanated from had been cut off totally from source at the NNPC Station.”