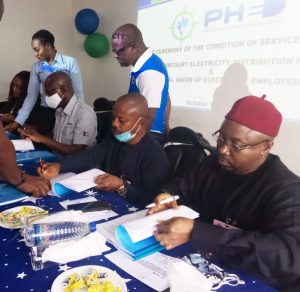 Port Harcourt — The Port Harcourt Electricity Distribution Company, PHED, on Wednesday, affirmed its commitment towards improving the welfare of its workers.

Managing Director of PHED, Dr. Henry Ajagbawa, disclosed this during the official signing of condition of service and procedural agreement between the company and the National Union of Electricity Employees, NUEE in Port Harcourt.

Ajagbawa pledged to continuously work together with the labour union for workers welfare, explaining that 236 distribution substation operators, who hitherto were contract staff, have now been converted to full fledged staff of PHED.

The PHED boss also disclosed that the company was on the brink of death when he took over in January 2020, hence, every funds generated by the Disco was now channeled to system improvements.

“Labour is very important to us because we value our staff. We are planning to introduce a profit sharing formula, where our workers will share in the company’s profit.

“However, our bill collection has been very low, our bill for each month is about N4.5billion, but what we collect now is about N2.7billion. I am a lover of labour, I increased salaries of our linesmen for productivity because if you pay a man below his living wage, he is going to steal and that is encourages corruption.

“Let me announce it here that as soon as we make improvements in our bill collection, there will be increment in our workers salaries, because we know that a motivated worker is a productive worker.”

Also, the General Secretary of NUEE, Com. Joe Ajaero, who commended PHED for the milestone narrived at the signing of the condition of service, urged the Port Harcourt Disco to see labour as its partner in progress.

Ajaero who is also the Deputy National President of Nigerian Labour Congress, also urged the management of PHED to improve on the salary scale of workers for productivity.

“Discos should learn to do more as partners in this project. Yes, you’re here to make profit and as well as to serve the public. I commend you for prompt payment of salaries but salary scale that has been there since seven years ago is no longer realistic.

“Please see labour as your partner in progress, we have engaged PHED in endless negotiations more than any other Disco, and thankfully, we are here today.”

For his part, the South-South Zonal Director, Federal Ministry of Labour, Mr. Ehigbai Iziren, charged companies to respect agreements reached with workers for progress and productivity.

“Management and workers must work together. The management must understand that there must be a symbiotic relationship with the union for peace, progress and productivity.

“We urge companies to keep to the sanctity of the condition of service. We, at the ministry frown at situation where the rules and agreement is flouted by any of the parties.”