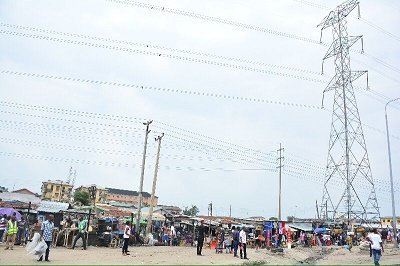 Port Harcourt — The Port Harcourt Electricity Distribution Company, PHED, on Monday cautioned members of the public who are in the habit of trading under high tension electricity lines in Akwa Ibom, Bayelsa, Cross River and Rivers States, to desist from it.

PHED Manager, Corporate Communications, Mr John Onyi, said the caution did not exclude those who are planning or have already erected structures under the power lines.

Onyi gave the warning during a public awareness campaign tagged, ‘Why you should not trade under the high tension lines’ which was organised by the Port Harcourt Disco in Abuloma area of Port Harcourt, the Rivers State capital.

The PHED Spokesman regretted that many lives have been lost due to non-adherence to safety standards, disclosing that last month, a 14year old boy lost his life when a line snapped on Abuloma 11KV feeder and rested on top of a building.

“However, we have noted with dismay that members of the public have habitually jettisoned the safety rules, hence PHED is calling for concerted effort in enforcing the safety standards in order to save livesn by the relevant authorities.

“In view of the above, PHED, has embarked on door to door safety awareness campaign on the dangers inherent of trading or living under the high lines especially those found to have contravened the safety standards.”

PHED further warned that the company would not be held responsible in the event of any electrical accident under the high tension lines, having repeatedly sensitized members of the public.