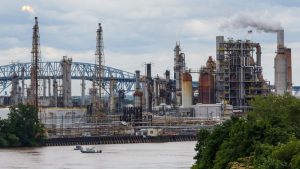 Philadelphia — At Erin Pub, a classic Irish neighborhood bar in Norwood, Pennsylvania, dozens of Philadelphia Energy Solutions Inc’s unionized employees crammed around the bar on Wednesday night, toasting to their friendships after learning that day of plans to close the refinery permanently after a devastating fire less than a week earlier.

They were openly worried about what the job loss would mean for their lives and their families. The refinery, the biggest on the East Coast, employed more than 1,000 people, including more than 600 unionized workers. Most were told their jobs would end by mid July, while others would stay for two weeks beyond that.

“I have a kid I’m about to put through college, and I have no idea how I’m going to do that now,” said one worker, who had been with the refinery for more than a decade and who asked not to be identified.

The workers, both union and non-union, are not expected to get severance packages or health benefits, dumping them into a shrinking energy workforce without a parachute. In the months leading up the closure, the company saved cash by laying off a number of salaried employees, all whom received standard severance packages, two sources familiar with the company told Reuters.

“We have some people who have spent their whole careers in the refinery. It’s not just a workplace, it’s a culture,” said Ryan O’Callaghan, president of the local United Steelworkers union and an operator at the refinery.

Many had been through the plant’s ups and downs, from good years earlier this decade to a bankruptcy process last year, but the fire has left them jobless in a region that only employs about 2,000 workers in the refining industry.

“These jobs are hard to duplicate. It’s not like there are a lot of refineries around here anymore, so it’s going to be a challenge,” said Steve Bussone, 54, a union lab technician with 23 years at the refinery.

He was hoping to retire in about ten years, but the closure may delay those plans. He was not preparing to start over at his age and said the potential lack of a severance package makes the whole process that more daunting.

The June 21 fire started in a butane vat, and was followed by a series of explosions that ripped through the 335,000 barrel-per-day plant, the oldest on the East Coast, which destroyed at least one key unit and threw fragments onto nearby highways.

Just four days later, Chief Executive Mark Smith said the plant would close indefinitely. The company is planning a sale, but that process, and a subsequent reopening, is not likely to happen for years, if at all.

“We cannot commit that (a restart) will occur,” Smith said in a letter to the union. “As such, all layoffs are expected to be permanent.”

For some, Wednesday’s official announcement was a confirmation of what they knew was inevitable after the massive fire.

The plant banked big profits in 2013 and 2014 as it used trains to bring crude oil in from the burgeoning shale business in North Dakota. However, after a 40-year-ban on crude oil exports was ended in 2015, oil drillers found it more profitable to ship crude to U.S. Gulf-area refiners by pipeline and to export destinations.

Since then, the refinery has struggled, even after reducing its credit obligations through a 2018 bankruptcy process and having slashed worker benefits and pensions. Its cash balance had dwindled by 40% to $87.7 million in just three months, leaving it in a precarious position before the fire.

Still, the decision came as a bitter blow, as previous owner Carlyle Group (CG.O) paid itself out nearly $600 million in dividend-style distributions, many taken through loans against the plant’s assets, since taking over the refinery in 2012.

Rich Francis, 28, a gasoline trader at the company, was one of the 150 or so non-union employees fired on Wednesday as the company seeks to shut the refinery.

Like the others, Francis got no severance package and his family’s health benefits run out at the end of July – which will hit hard, as his wife recently had a kidney transplant that requires expensive medication daily.

“They have given me so little runway here. It’s real disappointing in how the company handled this,” Francis said.