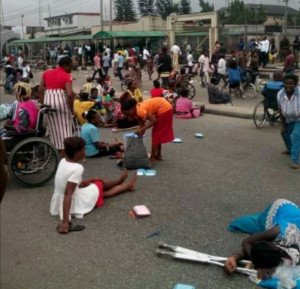 The protesters, under the aegis of Great Minds Foundation of People Living with Deformities in the Niger Delta, are demanding from SPDC a total sum of N567million for the ‘empowerment’ of its members.

The picketing which began since on Wednesday has now entered a second day, with the impeding of access in and out from the SPDC industrial area in Port Harcourt.

Reacting to the development, the management of SPDC said all pleas to the protesters to vacate its access gates and embrace dialogue has failed, as they (protesters) presented another request for N20million as a condition to demobilize their members.

Odugbesan disclosed that already, the company has many programmes in support of people with special needs both within the Niger Delta and around the country.

“The group presented a letter, dated 15 January 2021, demanding from SPDC a total sum of N567million for the ‘empowerment’ of its members.

“We have shown the group evidence of the many programmes in support of people with special needs both within the Niger Delta and the wider Nigeria. They form a key part of our social investment programmes for vulnerable groups in our communities.

“We believe in dialogue and would advise the group to embrace non-disruptive approach in soliciting support We are also asking the group to vacate our access gates and premises and desist from threatening and harassing our staff.”