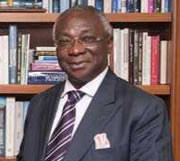 01 May 2013, Lagos – A former Chief Economic Adviser and Petroleum Minister, Mr. Philip Asiodu, has called on the Federal Government to immediately commence the re-negotiation of fiscal provisions in deep offshore Production Sharing Contracts, PSC, while the Petroleum Industry Bill, PIB, is being awaited.

“There is a suggestion in some government circles that decisions on auctioning of concessions blocks, renewal of Oil Mineral Leases, among others, must await the passage of PIB. This is a wrong approach.

“I can see no rational explanation for not negotiating within the existing contracts to optimize Nigeria’s revenue up to the targets hoped for in PIB, while waiting for it to become law,” Asiodu said while delivering the keynote address at the 6th annual Nigerian Association for Energy Economic, NAEE, international conference in Lagos.

He maintained that there are many good things, similar to what the PIB hopes to achieve, which can be accomplished through negotiation and by acting with existing laws.

He disclosed that the PSCs executed in 1993 had three re-opener conditions which include the re-negotiation of the fiscal terms if the price of oil rose to US$20 per barrel; if mega discoveries were made of reserves above 500 million barrels and after 10 years of the first contract.

He noted that the US$20 per barrel threshold was reached in the year 2000, reserves of 500 million was achieved within seven years by a few consortia while the 10-year date of the first contract elapsed in 2003.

“In the end, whatever the wishes of a nation in global competition to attract investment and partners in progress, it can only conclude internationally competitive contracts and must demonstrate a habit of respecting such contracts,” he noted.

He bemoaned the fact that promoters of gas-based industries have been engaging in futile discussions with the Nigerian National Petroleum Corporation and the authorities in the sector for over 10 years over appropriate pricing for gas.

He disclosed that in such situations, the country is driving investment to more investment-friendly countries, which are increasing on a yearly basis.

He pointed out that the problems affecting the country’s oil and gas sector are the same problems which have over the years impacted negatively on all aspects of the national life.

According to him, things will only begin to improve if the government and national leadership will undergo a revolutionary change and embrace all the aspects of good governance.

“Eighteen months of sustained good governance will put Nigeria on irreversible path to wealth, stability and greatness,” he maintained.

Continuing, Asiodu said, “The smoothest and least traumatic scenario is for the incumbent President, Dr, Goodluck Jonathan, with the authority derived from a universally acclaimed election to assume that role of imposing good governance in all aspects of our nation during the next two year.

“To this end, these entails: the rule of law; efficient and prompt administration of justice; predictability, objectively and consistency in government measures; respect for sanctity of contracts; imposing discipline and coordination in fixing salaries and allowances of all political office holders, among others.”