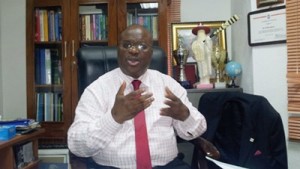 08 February 2017, Abuja – The vandalism of pipelines, particularly in the Niger Delta, does not really hurt the Federal Government, but those living in communities where the menace is being perpetuated, the Minister of Power, Works and Housing, Babatunde Fashola, has said.

Fashola stated this at the headquarters of his ministry in Abuja on Tuesday while inaugurating six commissioners for the Nigerian Electricity Regulatory Commission, but without a substantive chairman for the agency.

The minister noted that if not for the vandalism of gas pipelines, the country would have been generating about 6,500 megawatts of electricity instead of the current 3,500MW.

Fashola said, “I will again use this opportunity to reiterate to members of the public and to our brothers in the part of the country where they are breaking the gas pipelines that everybody suffers and this is not the way to get the government to act. And it doesn’t hurt the government really; it is the people who are our brothers and sisters who are harmed.

“As the gas lines are back, we can immediately recover 3,000MW of power in addition to the 3,500MW that we have now. So, we will automatically be going to over 6,500MW. Therefore, we will continue to appeal to them in the way that the President and the Vice President are appealing.”

The minister also told Nigerians that they should forward their power complaints to NERC and not to the ministry, particularly now that the commission had got commissioners, as he emphasised that the power sector had been privatised since November 2013.

He said, “So, for the avoidance of doubt, power is now in private hands and the government is now largely a policymaker and a regulator. Policy is the work of the ministry. Regulation is the work of NERC, acting through the commissioners we inaugurate today.

“So, for all those seeking licences to generate power, to build coal and solar plants, and all other similar proposals, your letters should go to NERC and not to the ministry. Although you can copy us for information.”

Fashola added, “For all those who have issues with meters, estimated billing and customer service issues, this is the work of NERC to ensure that the Discos perform, and I urge you to direct your complaints to them. But I am not complaining. Those who text me from all over the country that they don’t have power, I will continue to interface (with them).

“But let all of us just know whose work this really is and that is the work of NERC. However, it remains the ministry’s responsibility to oversee all the players in the industry to make sure that they work seamlessly to deliver stable power supply.”

The minister welcomed the commissioners and noted that their inauguration was pursuant to their nomination by the President and confirmation by the Senate.

“They have been chosen in the manner prescribed by law and I particularly welcome their arrival for many reasons. Their arrival provides stability in governance regulatory action and institution building to the sector, and allows the ministry to focus on policy, coordination and completion of ongoing generation and transmission projects,” he said.

The minister directed the acting Chief Executive Officer of the commission, Dr. Anthony Akah, to hand over to the vice chairman and thanked him for his service so far.

Fashola said, “I will like to thank Dr. Anthony Akah, who acted in the capacity of the CEO of NERC for about a year. His service to his country is highly appreciated and he must now hand over to the vice chairman and his fellow commissioner and return to his normal schedule of duties.”

“To NERC and the new commissioners, I welcome you on board. Be firm, but fair. Regulate but be business oriented. Remember that regulations are rules and rules are made for us, we are not made for rules. Regulate with the understanding that the industry is young, is in transition and needs support.”

Speaking on behalf of the commissioners, the Vice Chairman of NERC, Mr. Sanusi Garba, promised that his team would live up to expectation and would not disappoint Nigerians in the discharge of their duties.