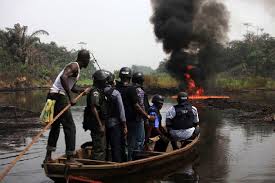 *Nigerian navy personnel being ferried to a vandalised pipeline in the Ishawo/Arepo area of Ikorodu.

17 February 2016, Lagos — NO fewer than two naval officers and a boat operator were killed in a recent face-off between the joint security forces and pipeline vandals around Ishawo/Arepo area of Ikorodu, Lagos state governor, Akinwunmi Ambode has been told.

Men of the Nigerian Army told Ambode yesterday that the incident occurred during Operation Awatshe where 15 suspected vandals were arrested and over 2,000 50-litre jerry cans seized and 36 vehicles impounded.

Meanwhile in Ibadan, Oyo State, three men were on Tuesday granted bail by the Federal High Court after being charged for alleged vandalism of pipelines.

Ambode who said that the state would no longer condone vandalism directed the Nigerian Army, Police and other security personnel to immediately intensify arrest of suspected vandals and cultists in the state.

Commanding Officer of 174 Battalion Lieutenant Colonel Julius Ogbebo had told Ambode during an inspection tour of Ishawo/Arepo on Tuesday, that the joint forces had recovered Little Palace Hotel, one of the locatons the vandals often used to commit their criminal activities in the area.

Ogbedo said: “Also sir, we have recovered over 36 vehicles and we have more than 15 suspects. Some of them have been handed over to the Nigeria Security and Civil Defence Corps (NSCDC) for prosecution and further action.

So far, we have tried to garrison Ishawo and Arepo but still the vandals have not relented in their activities.

Last week, we lost two of our Naval personnel and a boat operator,” he said.

The governor, who commended the security forces, said that it was high time the government had deployed all of its might to clampdown on the vandals and other criminals.

He said: “I would like to use this platform to give a very strong warning to vandals and even cultists that are parading themselves on the streets of Lagos. Just recently, we heard that the fingers of some of our men in the Task Force were chopped off by some hoodlums.

“I am using this platform to direct our security forces that they should go ahead to use appropriate force to mitigate such incidents in the overall interest of all of us while we we are upholding the rule of law,” he said.

Commending Operation Awatshe since their deployment to the axis last year, Ambode said: “I have come here personally with heads of security agencies and the security council members in Lagos state to first appreciate the work of security agencies that have been posted here since last October and to also commend you for the improvement we have made since the time that you commenced operation here.”
*Sam Oluwalana & Wole Oyebade – Guardian