PMS sells above N97 per litre 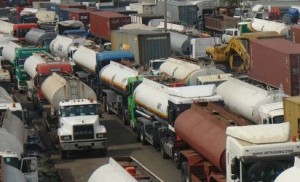 29 April 2014, Lagos – Despite the availability of Premium Motor Spirit, PMS, also known as petrol, some filling stations in some parts of Lagos continue to sell the product above federal government’s approved regulated pump price of N97 per litre, investigation reveals.

Lagos and most parts of the South West and Abuja, have always enjoyed buying petrol at the regulated pump price, while the rest of the country continue to purchase the product at exorbitant prices depending on the whims of the marketers.

The development is one of the reasons government is pushing for the full deregulation of the downstream petroleum subsector, to allow marker forces determine price as well as eliminate the endemic corruption pervading the sector.

Notwithstanding the price paid by motorists, these filling stations still display N97 on their meters as a disguise, but coerce Nigerians into paying between N110 and N200/litre depending on the location of the station.

It was gathered that the practice in Lagos started during the fuel scarcity that rocked the country in the first quarter of 2014, when marketers sold petrol above the regulated pump price in the open market in protest of the non-payment of subsidy claims by government. The major culprits of these sharp practices, which also include under-dispensing and hoarding of products, are the independent operators, as outlets of the Major Oil Marketers Association, MOMAN, which include Total, Conoil, Mobil, MRS, and Forte Oil, still sell petrol at N97/litre.

*Enforcing compliance
To check the malpractices and enforce strict compliance, the Department of Petroleum Resources, DPR swung into action to shut down some of the outlets in Lagos, and also threatened to have their licences revoked.

Among the outlets sanctioned during a recent routine inspection by DPR in Lagos was Rain Oil at Okota for under dispensing of fuel. Feroselina Oil also at Okota, Isolo was penalized for hoarding of product and selling above N97/litre.

Commenting on the exercise, DPR Lagos Zonal Head of Operation, Mr. Adekunle Soyebo, said the objective of the exercise is to check the hoarding, under-dispensing and selling above the official regulated price.

Despite the clamp down, many retail outlets are undeterred but continue to sell above the regulated price. Among the outlets are those located in Ojo, LASU-Iba Road, Badagry, Ikorodu areas of Lagos.

*Reasons for malpractices.
Explaining why some petroleum outlets persist in selling fuel above N97/litre, a depot official in Kirikiri who pleaded anonymity, said before the approval of the Q2 importation allocation, some oil marketers imported petrol at high international price.

As a result, he said marketers needed to recoup their investment since the funds are borrowed, especially with the talk of the removal of subsidy.

He asked, “Why won’t they sell above N97 when the premium to import is high?The product is imported based on international price, and this is why DPR is limited.

“The reason major marketers still sell at N97 is because they have bulk purchase agreements with NNPC, and they can also load from the Ejigbo Depot,” the source said.

Another source in the ApapaDepot argued that by refusing to pay subsidy claims of those who genuinely imported petrol, the federal government is not creating an enabling environment for importers and marketers.

He criticized that government wanted to use the excuse of products scarcity, “to sell the refineries to their cronies at giveaway prices.

“Nigerians should reject this type of blackmail, and government should do the needful by encouraging local refining of the products by carrying out Turn Around Maintained, TAM on the refineries while ensuring that they have adequate supply of crude.

He also charged marketers to put “national interest above personal interest ones by genuinely engaging in due process of products importation instead fraudulent practices.”

To forestall a repeat of the recent acute fuel scarcity caused by the late release of the Q1 2014 import allocation, the Government has releasedtheQ2 allocations for NNPC and private Oil Marketing and Trading (OM &T) companies.

The Q1 allocations, which ought to have been released at the end of December 2013 or the beginning of January 2014, to enable NNPC and marketers import products, was delayed till February 21, 2014, causing months of scarcity and hardship for motorists and other users petrol.
*Kunle Kalejaye-Vanguard