Police impounds 900,000 litres of adulterated AGO in Rivers 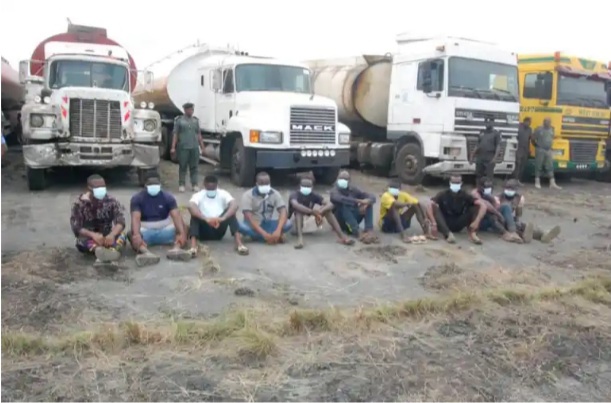 *Some of the suspects with the impounded trucks

Port Harcourt — The Inspector General of Police Special Taskforce on Petroleum and Illegal Bunkering, has impounded over 900,000 litres of adulterated Automotive Gasoline Oil and 30,000 litres of crude oil between February and March 2022 in Rivers State.

Commander, IGP’s Special Task Force on Petroleum and Illegal Bunkering, DCP Usman Jubrin Kanfani, explained that 13 suspects were arrested, as well as 15 trucks loaded with 45,000 litres of AGO each, as well as two short trucks with 12,000 of products each in the state.

Kanfani represented by the Acting Force Public Relations Officer, Olumuyiwa Adejobi, who paraded the suspects at the Taskforce’ base within the Port Harcourt refinery complex, said some of the adulterated drums of AGO were concealed in two differerent container trucks carrying food stuffs and fertilizers.

“Sequel to the Federal Government’s and Rivers State Government unrelenting pragmatic and sustained fight against illegal bunkering, pipeline vandalism and economic sabotage, the Inspector General of Police’s Special Task Force on Petroleum and illegal Bunkering Force Headquarters Abuja has impounded about 900,00 litres of product suspeeted adulterated Automotive Gas Oil and about 30,000 litres of product suspected to be crude oil within Rivers State from February to March, 2022.

“Two container body trucks disguised to be loaded with foodstuff and groceries were also impounded by the Special TaForce after a thorough stop and search discovered each truck was loaded with about 40,000 litres of petrol product tested to be adulterated AGO.

“One tanker loaded with about 30,000 litres of tested crude oil was also intercepted at Oygbo area of the State.”

The Police explained that samples of the products were collected and tested in chemical laboratories, and the results revealed the products do not meet the specifications of the Standards Organisation of Nigeria.

He warned hoodlums and other criminal elements who engage in oil theft and illegal oil bunkering activities to desist from such crimes, assuring that the Taskforce will not relent in ensuring that the criminals face the full wrath of the law.

He also urged members of the public to support the police in kicking crime away from the country, adding that the Nigerian Police Force believes in technology-driven and community-partnership policing.

“These criminals also stuff adulterated petroleum products in sacks, jerrycans; load them in saloon cars, buses and other vehicles and convey them to various buyers. Efforts are on top gear to arrest other suspects in connection with the offense.

“The Commander IGP’s Special Task Force on Petroleum and Illegal Bunkering Force Headquarters Abuja DCP Usman Jubrin Kanfani assures the people of Rivers State and the country atlarge of IGP Usman Alkali Baba’s commitment towards fighting all forms of criminality including the protection of government and public critical assets in order to curb economic sabotage and restore a healthy environment.”