Port Harcourt — The Rivers State Police Command says it has recovered and arrested armed robbery gang who hijacked a truck loaded with 150,000 bags of fertilizer from Onne seaport for delivery in Kano State. 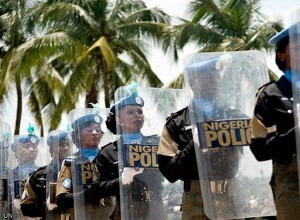 The Commissioner of Police in Rivers State, Friday Eboka, made this known while briefing newsmen on the recent achievements of the Command, and parading of the suspects at the police headquarters in Port Harcourt.

Eboka explained that the feat was achieved by police operatives of the Elimgbu Police Division, assuring that the five suspects arrested will be charged to court.

“Operatives of Elimgbu Police Division responded to a distress call at Oilmill junction where they arrested three armed robbers, with a white Hilux car, who attacked one Mohammed Sule ‘m’ the driver of a DAF Truck with Reg. No. PKM491XA, which carried N150,000 bags of fertilizer valued at N22,000,000 and the DAF truck valued N23,000,000 from Onne for delivery in Kano State.

“The robbers attacked and took them to Igbo/Etche bush where they diverted the goods and lorry.

“However, on sighting the police, the hijackers zoomed off. Police operatives swung into action and gave them a hot chase which led to their arrest, while one of the suspect sustained bodily injuries.