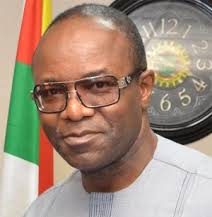 Princewill Demian
01 March 2018, Sweetcrude, Abuja – The Minister of State for Petroleum Resources, Dr. Emmanuel Ibe Kachikwu, has said political jobbers are peddling rumours of his alleged political interest to distract him from his responsibilities.

Speaking to journalists in Abuja, Kachikwu said there was no truth in claims that he intends to contest the Delta State governorship election in 2019.

He described the reports as “fictitious, baseless and mischievous”, adding that it does not reflect his current thinking as head of one of the key ministries.

The minister said his focus is on resolving the petrol scarcity challenge which has resulted in long queues across many cities in the country.

“The enormity of the problems the current administration met on ground in the petroleum sector is one that requires a great deal of focus and commitment to tackle and by God’s grace, we will get there,” Kachikwu said.

“So we can do without some of these distractions that blow hot air and heat up the polity without addressing the immediate needs of the citizenry.

“At the moment we need to support President Muhammadu Buhari in his drive to reform the petroleum sector, so putting unnecessary pressure on those directly working with him will not only distract but could delay the process as given the enormity of the problems all hands must be on deck to achieve the kind of reform needed in the sector,” he added.

Kachikwu warned those behind the reports to leave him out of their local politics and allow him to concentrate on his national duties as assigned to him by the president.