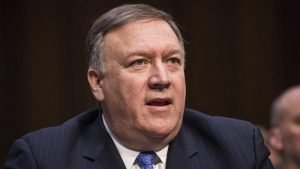 Dubai — U.S. Secretary of State Mike Pompeo said on Thursday the United States was building a coalition to deter Iran after an attack on Saudi Arabia’s oil facilities but it wanted a peaceful resolution.

“We are still striving to build out a coalition in an act of diplomacy while the foreign minister of Iran is threatening all out war and to fight to the last American, were here to build up a coalition aimed at achieving peace,” Pompeo told reporters after meeting Abu Dhabi Crown Prince Sheikh Mohammed bin Zayed.

Also Read: Real crunch from Saudi Arabia’s oil outage has yet to be felt