Poor state of the roads has made extortion lucrative for hoodlums

Lagos — A group under aegis of the Council of Maritime Trucks Union Associations, COMTUA, has decried the poor state of the port access roads, that has enhanced extortion and caused damage to their trucks. 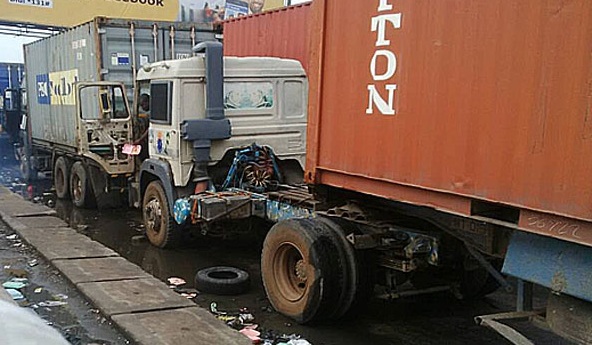 *Trucks on the Apapa Oshodi Expressway

In statement, Chairman of the COMTUA, Comrade Adeyinka Aroyewun also said all unapproved monies collected by the management of Truck Transit Park Limited, TTP, must be refunded adding that these illegalities being perpetuated by stakeholders in the port industry was due to failure of government.

Aroyewun explained that truckers were at the receiving end of government’s failure without being the cause of the challenges currently confronting the port industry.

He said: “There is congestion at the ports currently as the terminals are overwhelmed and the road overstretched. That the poor state of the road is making extortion lucrative for hoodlums and causing damages to vehicles is not in doubt, but who is the victim?

“While the failure of government to put the road in proper shape, secure the country, provide employment for the youth is not doubt, the burden and punishment is melted on citizens.

“In the case of our trucking business, only truck owners bear the cost. I have checked and still checking to know where truckers have caused congestion and still cannot find one. Even where it is claimed to be, there are sanctions and penalties. Who else have been sanctioned for other reasons leading to congestion?

“The shipping companies and Terminal operators’ charges demurrage and claims alot of money for problems caused by them. The government through several agencies proliferated for more oppressive purposes collects fines. To add salt on injuries, NPA whose failure and mismanagement have led to Concessions and deprivation of some sort have now conspired with TTP to milk truckers of over N40billion between February 2021 and July 2022.

“No regulation from the economic regulator. It is obvious that everyone is against truckers, and this is a recipe for anarchy.

“My advice to government is to ensure that this illegality is stopped, a forensic audit be conducted, and entire refund be made to truckers. The TTP /ETO shouldn’t have been in the first place, if NPA’s responsibility of cargo handling cannot pay wages and improve infrastructures within their premises, Truckers should not be sacrificed for their redundant employees and the extravagant standard of living of their management.

“All legal and legitimate means shall commence against all of these irregularities in the next seven working days.”