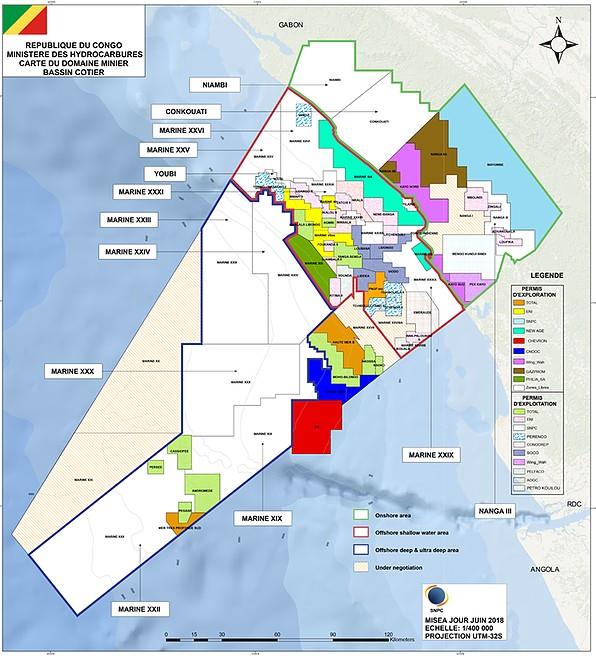 *Coastal Basin oil block map of the Republic of Congo.

24 January 2019, Sweetcrude, Lagos — Results from the Republic of Congo’s first licensing round, with the award of blocks to Kosmos Energy and Perenco, and the provisional attribution of a block to Total, present a positive backdrop for the country’s second round which will close in June 2019, says GlobalData, a leading data and analytics company.

The company’s ‘Republic of Congo Upstream Fiscal and Regulatory Report’ explains that this second licensing round offering 18 blocks will be the second test for the new hydrocarbons framework, introduced in 2016 when the country adopted a new hydrocarbons code and production sharing model. Regionally, the Republic of Congo presents relatively attractive contractual terms for oil and favorable terms for natural gas.

Alessandro Bacci, Oil and Gas Analyst at GlobalData, comments that “Much of the fiscal burden under new contracts is linked to negotiable terms and may, therefore, depend on the levels of investor interest.

The results of the first round appear encouraging, though, after the closing of the first licensing round, it took a long time to award the blocks to the IOCs.

Additionally, five blocks on offer through the second licensing round were already unsuccessfully offered during the first round.”

The report also notes the Republic of Congo aims to increase the development of its gas sector. Specifically, the country wants to promote development through four avenues: gas to power (the only one implemented right now), gas to industry, petrochemicals projects, and gas export.

Bacci adds: “Although the new hydrocarbons code has improved gas terms, the passage of a new gas code is crucial to support such developments. Most gas projects are in the early design stages, and a clear government policy and regulatory environment will be needed to attract investment.”