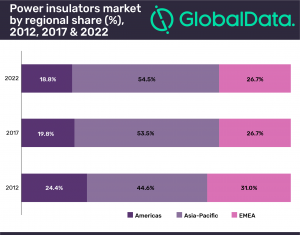 The company’s report: ‘Insulators for Power Transmission, Update 2018’ states that the Asia-Pacific region was the largest market in 2017, holding 53.5% share in terms of market value. EMEA (Europe, Middle East, and Africa) was the second-largest market, representing 26.7%, followed by the Americas with 19.8%.

Subha Krishnan, Power Analyst at GlobalData, comments: “The global power insulators market is highly fragmented with global and local players competing for market positions. Various competitive factors determine the ability to sustain in the market amid growing competition. Prior expertise and timely delivery are considered by utilities as key factors for awarding the contracts.

“Larger scale of production is a key advantage, where a manufacturer can stockpile raw materials, allowing large-scale production at the time of demand and delivering them in much shorter lead times. The global market for insulators and their manufacturing base is mostly concentrated in regions such as the US, Western Europe, China, India, and some Southeast Asian countries.”

Krishnan adds: “China and India are the fastest-growing economies, consuming more than a quarter of global power. Both these countries are undertaking extensive capacity addition in the power generation and transmission sector.

“China and India are the world leaders in ultra-high voltage transmission owing to their large investments in transmission systems of voltage level 765 kilovolts and above.”