23 April 2014, Monrovia – Liberian President Ellen Johnson Sirleaf has paid a visit to the rig, some 15 nautical miles off the Liberian coast, where ongoing oil exploration by the United States energy company, Chevron, is taking place. 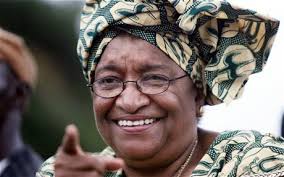 According to an Executive Mansion release, the Liberian leader said she was highly impressed by the level of the Liberian workforce involvement in activities at the rig which demonstrates adherence to local content commitment.

President Sirleaf said she was glad that the Liberians on board are not only distinguished citizens; but at the same time, handling other technical operations on the rig which sends a signal that Liberians can do even better when giving the opportunity.

She encouraged her compatriots currently assigned on the West Tellus to continue to be committed and dedicated to duty as they serve as Liberian ambassadors on the Chevron rig as well as examples for potential Liberians who could be recruited to work in the industry.

Demonstrating this, Mr. Alfred Johnson Kamara, a Liberian, led President Sirleaf on a guided tour of the gigantic marine carrier explaining various functions and duties of each section at the amazement of the President.

“The commitment demonstrated by the national staff,” President Sirleaf said, “was in further manifestation of how Liberians continue to tell the world that they have skills and only needed to be tapped.”

This is not the first time Chevron has praised Liberians about their commitment to duty. Three years ago, several vehicle operators of the Executive Protection Service (EPS) were sent to the United States where they underwent training on how to operate the presidential fleet. The Liberians performed exceptionally well ahead of other nationals also participating in the training.

President Sirleaf emphasized that the performance displayed by young Liberians show how they can perform when given the opportunity and the space. She was responding to a national staff of Chevron who expressed gratitude to her administration for creating the investment opportunity that resulted to their recruitment in the drilling industry.

The Liberian leader appealed the Chairman of the Board of National Oil Company of Liberia (NOCAL), Cllr. Seward Cooper to take into consideration the pleas of the national staff on the rig for training opportunities. Cllr. Cooper praised the enthusiasm of the local staff and promised NOCAL’s continuous help to educate Liberians that would allow them to fully participate in Liberia’s oil future.