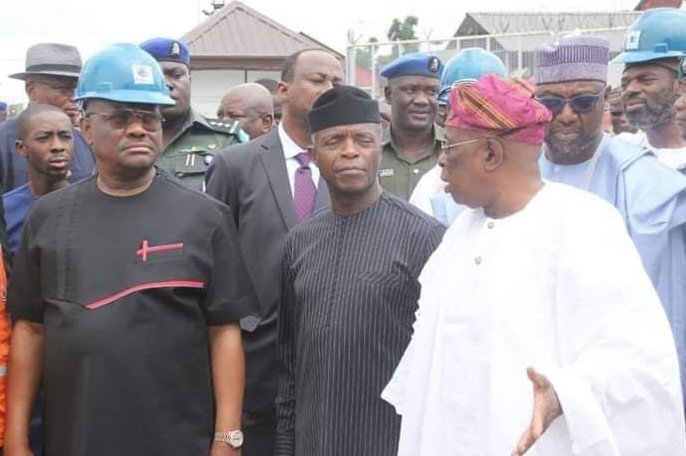 Wike informed the Vice President that NPA entered into an agreement with the State Government to construct the road leading to the Port Harcourt seaport, but later reneged on its commitment.

“I want to report NPA to Your Excellency, the Vice President. They have not been good neighbours. We entered into an agreement to fund the construction of the Industry Road leading to the Port. NPA reneged and the State Government had to fund the project single-handedly.

“Till date, NPA has not paid its counterpart fund for the construction of that road. All they are interested in, is to collect rents from the occupants of the Port,” he said.

The Governor urged the Executive Director, Marine, and Operations in NPA, Mr. Sokonte Davies, to work with other officials of the agency to actualize the dredging of Rivers Port while appealing for NPA’s collaboration with the State Government in creating the right environment for the state’s development.

Earlier, while commissioning the Port Harcourt Dockyard Liquid Waste Treatment Plant, Vice President Yemi Osinbajo said the project was in line with the Build, Operate and Transfer Agreement, BOTA between African Circle and the Federal Government, for a period of 20 years.

Osibanjo said the commissioning was another opportunity for Nigeria to lead the way in the improvement of the environment, adding that the Federal Government will continue its partnership with Africa Circle Pollution Management Limited for the promotion of environmental protection and sanitation.

The VP added that the Federal Government’s ease of doing business policy will be diligently pursued. He noted that the dredging of Warri Port is on course with a railway line into the hinterland.

Also, a former Ogun State Governor, Chief Olusegun Osoba, said that the facility will collect oil waste and transform them into useful by-products.

Osoba said that the company has invested $8 million in setting up the company which will help to clean up the maritime industry.

Former Head of State, Rtd Gen. Abdulsalami Abubakar said that the company was a necessary addition to the maritime sector.