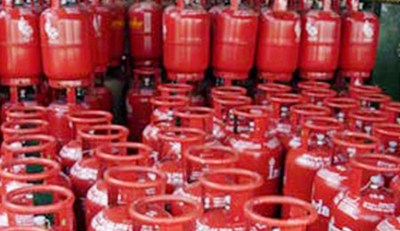 Lagos — The price of the 12.5 kilogramme, kg, of Liquefied Petroleum Gas, LPG, or cooking gas, has hit N8,500 in parts of the country despite Federal Government’s plan to make the product appealing the common man.

The government earlier this year launched the National Gas Expansion Programme, NGEP, to drive  increased utilisation of gas as better alternative for petroleum fuel for homes, industries and automobiles.

The high price of the product since about three months ago is caused by a supply gap following a drop in importation as the government imposed an import tax on cargoes arriving the country.

Of the 1.2 million metric tonnes, MT, of the product required for consumption in the country, the Nigeria LNG Limited, NLNG, supplies about 450,000MT while independent marketers supply 750,000MT through imports.

The Federal Government’s GEP was designed to make gas more attractive and accessible to the masses thereby increasing its usage for cooking, transportation, and in industries.

However, despite this plan, prices of cooking gas has kept soaring in recent months, from about N3,500 last December, to between N8,000 and N8,500 as at time of filing this report.

SweetcrudeReports’ findings showed that the landing cost of the product has since skyrocketed as a result of a recent crisis in the foreign exchange market and the imposition of a new tax.

The Petroleum Products Pricing Regulatory Agency, PPPRA, said out of the 85,264.80MT of LPG consumed in the country in August, 38,040.46MT were imported.

This puts level of importation at 55.39 percent versus 44.61 percent supplied locally.

Recent reports had marketers warning that price of 12.5kg of the product could hit N10,000 by December if pending concerns were not addressed.

Marketers have debunked inflating prices, passing the buck rising prices to the NLNG.

On the other hand, the NLNG claimed that marketers lacked enough infrastructure to take up its cooking gas supply, a claim also refuted by the marketers.

“Nigeria needs 1.2 million metric tonnes per annum, but even the 450,000 we produce cannot be absorbed by the market’s current infrastructure.”

When asked if the NLNG’s position was true, the National Chairman, Liquefied Petroleum Gas Retailers Association of Nigeria, Michael Umudu, replied in the negative.

He said: “Marketers have the capacity to absorb the 1.2 million metric tonnes annually and this figure will continue to increase.

“Marketers have the capacity; rather, the challenges of the NLNG have to do with logistics. Many depots use to be empty for months; so, why should they say marketers don’t have capacity?”

According to Umudu, storage of cooking gas does not end in the midstream facilities, with inland facilities such as gas plants and retail outlets having more storage capacities.

“This is how it works: LPG is discharged in a depot, and LPG trucks are ready to load products to plants. From the plants, retailers refill their cylinders and store in their shops while end-users buy.

He added: “If the depot of 5,000MT storage capacity can do 15,000MT a month, then calculating other depots with even much more capacities and multiplying by three for a month turnover, you will realise that these depots would do up to 150,000MT monthly.

“And going by the 1.2 million MT annual consumption demand, we only consume about 100,000MT a month. So why should NLNG say there is no enough storage?”

The gas retailers’ chairman noted that the NLNG or any other supplier did not need to supply the annual need at once, adding that this was why he called for the improvement of logistics by the LPG producer.

“With respect to logistics, if they (NLNG) can adapt to compatible vessels and engage enough of the vessels, then more than 1.2 million MT annual estimate would be conveniently met,” Umudu added.

Reacting to the position of the marketers, the spokesperson of the NLNG, Eyono Fatayi-Williams, said the gas firm could only give 450,000MT at the moment to the domestic market.

She also observed that there were challenges with logistics, such as the delay of vessels at the Lagos port, but stressed that the NLNG was doing its best to deliver its part in the supply of cooking gas.

She explained that in 2007, Nigeria could only produce 50,000MT of LPG and that the NLNG was asked to intervene, stressing that the gas firm was primarily set up for export.

“Between 2007 and now, because we have guaranteed supply, the market has grown. Today, Nigeria can take over one million tonnes of cooking gas,” Fatayi-William said.

She added: “The maximum production we have of cooking gas is 450,000 metric tonnes annually and the market did over a million metric tonnes last year.

“Also, when we talk about logistics, the maximum amount we can now give, which is the maximum production volume, is less than what the entire country needs. We are not the only producer of LPG but we can only give 450,000MT.”