Price of kerosene soars in Anambra 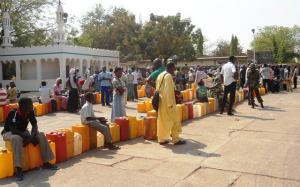 02 November 2012, Sweetcrude, AWKA – THE price of kerosene has continued to soar in Awka, Anambra state capital, and its environs due to the scarcity of the product, the News Agency of Nigeria, NAN, reports.

A correspondent of NAN who monitored filling stations in the town, reports that the product was being sold between N125 and N130 per litre as against the official price of N50.

Attendants in some of the filling stations said the high cost was due to lack of supplies.

At the NNPC mega station, the product was not available as it had not received supplies in the past three weeks.

According to the Assistant Manager of the station, Mrs Ngozi Onyiliofor, nobody knows when kerosene will be supplied to the station.

A house wife, Mrs Chinyere Onuorah, who spoke with NAN, expressed concern with the scarcity of the product and called on the Federal Government to make kerosene available to the masses.