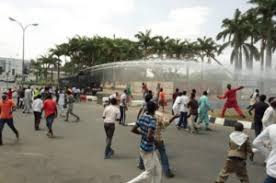 *Youths being dispersed at the protest site.

24 April 2018, Sweetcrude, Warri, Delta State — Protesters have shut down operations at Erhoike and Olomoro flow stations in Delta state, demanding that operators of the flow stations meet the communities within the next 7-days.

The protesters vowed to occupy the flow stations until the oil firm meets with them. Chairman of the Community Development Committee, Oleh spoke to newsmen at Olomoro flowstation, demanding that operators of the Olomoro flow station among other things include the name of Oleh on the identity of the flowstation.

He also said the women had to come out to shut down the flowstation because the operator had allegedly shortchanged the host communities.

Pastor Andy Adese who spoke to newsmen at Ehroike accused operators of the flowstation of allegedly failing to keep its deal with the community on matters of scholarship for youths, job creation and development of the area.